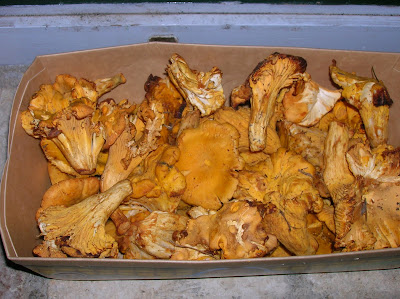 This week's economist reports on the work of Dr Alethia Vasquez-Morillas that looks at using mushrooms to deal with the trickiest of waste management challenges - disposable nappies. These nappies, so convenient to mums and dads, create something of a headache for waste managers:

DESPITE their name, disposable nappies are notoriously difficult to dispose of. Studies of landfills suggest they may take centuries to rot away.

And because of this our green friends have applied their unique form of passive-aggressive promotion to the advocacy of "real nappies". But now they can relax as Dr Vasquez-Morillas has found what looks like the solution:

This research assesses the feasibility of degrading used disposable diapers, an important component (5–15% in weight) of urban solid waste in Mexico, by the activity of the fungus Pleurotus ostreatus, also known as oyster mushroom. Disposable diapers contain polyethylene, polypropylene and a super absorbent polymer. Nevertheless, its main component is cellulose, which degrades slowly. P. ostreatus has been utilized extensively to degrade cellulosic materials of agroindustrial sources, using in situ techniques. The practice has been extended to the commercial farming of the mushroom. This degradation capacity was assayed to reduce mass and volume of used disposable diapers.

And you've guessed it, those lovely oyster mushrooms gobble up the nappies pronto!

As she and her colleagues describe in Waste Management, cultivating the right type of mushroom on soiled nappies can break down 90% of the material they are made of within two months. Within four, they are degraded completely. What is more, she says, despite their unsavoury diet the fungi in question, Pleurotus ostreatus (better known as oyster mushrooms), are safe to eat. To prove the point she has, indeed, eaten them.

Wonderful - dealing with a previously intractable waste management problem and providing a food source! What could be better!