Privatise town centres? A thought on reading The Portas Review 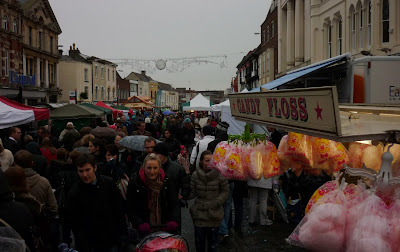 In her statement of “vision”, Mary Portas gets it about right:

“I want to put the heart back into the centre of our high streets, re-imagined as destinations for socialising, culture, health, wellbeing, creativity and learning.”

OK so it’s a little bit gushing (this is a TV ‘expert’ after all) but above all Ms Portas recognises that the future of the town centre doesn’t lie with retailing. Except that the entire report focuses on retailing, rolling out the same set of solutions that have failed in a myriad of places. “Town Teams” were a feature of Yorkshire Forward’s ‘Renaissance market towns’ projects – arrogantly shoving aside existing groups, town councils, district and county councillors and shipping in ‘experts’ from elsewhere who proposed stupid things that divided towns.

The Panel welcomes the idea of bringing together a fresh group of people to generate ideas for the visioning and Master Planning process. The Panel considers, though, that lead consultants have misinterpreted the flexibility of this approach and this has led to a lack of consistency in how Town Teams are set up and a lack of clarity regarding their role, remit, and how they relate to existing democratic structures. This ambiguity has caused considerable conflict in a number of towns.

All this gets back to the advantage that shopping malls have over town centres – single ownership – and setting up a town team, however this is done, doesn’t address that problem. Yet the reality of most town centres is that most of the land is in a single ownership – the local council. But that this owner doesn’t treat it as such preferring instead to see it as a collection of unrelated activities – roads, parks, markets, theatres, sports halls and office blocks.
Ms Portas wants town centres run “like businesses”:

“High streets should be run more like businesses. And businesses are run on the basis of strategic vision. However, unlike the sophisticated shopping malls or large retailers, high streets aren’t overseen by a single landlord or professional management body.”

Hence the town team, ‘business improvement districts’ and other similar initiatives. This isn’t a radical solution to decline in the town centre (less so when you couple it with proposals for more planning controls on out-of-town developments), it’s just a repeat of using “pseudo-business” structures to try and ape what happens in the mall and the supermarket. Remember the Urban Regeneration Company, what of town centre management companies and a bewildering variety of special purpose vehicles aimed at “regenerating” town centres.
A radical approach would be to transfer all that council owned land – the streets, the pavements, the market halls, the offices and the parks – into a for-profit company. Where, as in many places, the council owns freeholds of retail premises these can be added to the pot. And use that asset to create the excitement, the events and the environment – the “21st Century urban entertainment centre” that Ms Portas describes. That would be a radical approach rather than the rewarmed versions of existing – and mostly unsuccessful – strategies presented by Ms Portas.
The ownership of the company could vary – maybe co-operative or mutual, perhaps the local council or possibly a combination of these approaches. But it is essential – if the town centre is to be run like a business – the company is for profit. For it is the search for profit that makes the shopping malls and supermarkets creative, innovative and focused on getting the experience right for the customer.
Into this approach can be build structures akin to business improvement districts. Councils can be flexible on business rates. And can no longer use parking as a cash generator for the pothole repair fund.
Town centres are not about retail any more, they are about a place of interest, engagement and excitement – and the best of these places, as Mary Portas demonstrates again and again in her report, are privately-owned, privately-managed and run for profit.
It's a thought...
....
Posted by Simon Cooke at 12:40

And a good thought at that. Rather than denigrate out of town shopping malls, look at why and how they are successful and attempt to do the same in a town centre.