Sorry Tim but every day's a feast day in our house! 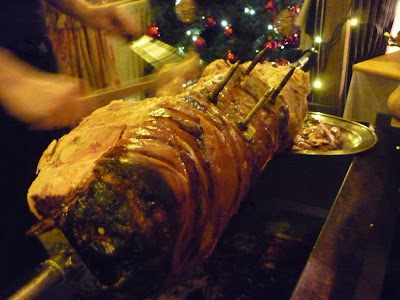 For lots of trendy foodie types – the locavores and such – Tim Lang is the man. This Professor churns out media friendly material that is seized on by the advocates of “meat free” and vegetarian lives. Now this man wants us only to eat meat on feast days - for the good of our health!  Professor Lang is wrong – massively and monumentally wrong:

Prof Lang, who advises the World Health Organisation, as well as the Department for Environment, on food policy, said eating too much meat can lead to serious health issues such as obesity, heart disease and type 2 diabetes.

Taking these things in order:
Eating “too much meat” isn’t the cause of obesity. Even the dear old NHS doesn’t list meat as a cause of obesity. In pretty general terms obesity results from ingesting more calories that you can use. And the main source of those calories isn’t meat, it’s processed carbohydrates – bread, pasta, pastry, cake, chocolate bars.
Eating “too much meat” isn’t a major risk factor in heart disease. Here from Scientific American:

Now a spate of new research, including a meta-analysis of nearly two dozen studies, suggests a reason why: investigators may have picked the wrong culprit. Processed carbohydrates, which many Americans eat today in place of fat, may increase the risk of obesity, diabetes and heart disease more than fat does.

OK that focuses on how saturated fats aren’t the culprit. But nowhere, not one jot, of evidence exists that shows meat to be a serious risk factor in heart disease.
And neither is meat the main risk factor in Diabetes 2. As Diabetes UK point out the risk factors for the condition include:
Nowhere there does the word “meat” appear.
The problem isn’t just that Professor Lamb is wrong but that his nonsense (and I’ve focused on the idiocy of his health claims – the same could be said of his economic and environmental arguments) is regurgitated by the media without challenge or criticism. The Professor is an “expert” and not to be questioned.
It really is time journalists began to do their job. Like asking people like Professor Lang to provide some real evidence for their claims rather than just giving them a great headline and a thousand uncritical words.
And here every day is a feast day!
....
Posted by Simon Cooke at 13:16