Too old to rock and roll? Forget it! Welcome to 21st century ageing. 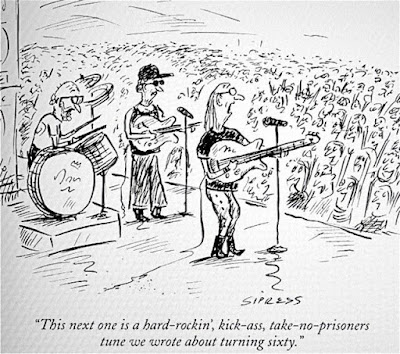 The so-called WASPI campaign for women affected by the change in their retirement age from 60 to 66 has been a feature of news and comment for a while now. It is one of those odd quirks - not always a good one - of policy changes that some people are caught in the change meaning that, while nearly everyone accepts that the new policy is a good one, they also want it not to affect those caught in the change. In a society where women are not excluded from the workforce and where efforts are made to treat those women equally, there is no justification for having a different retirement age for men and women. Nor, given average life expectance pushing 80 years, is there much sense in younger people being taxed to provide twenty years or more of living for those older people.

But I don't want to discuss this issue but rather for it to provide a little context for a look at age discrimination in the UK. This has interested me for a while but was prompted by someone tweeting a rather unfunny quip about all of UKIP members being old dodderers. It wasn't that UKIP's members aren't disproportionately older but that it was fine to criticise - with references to Stannah and Saga - a group of people purely on the basis of their age. My concern though isn't that some people are unpleasant but whether this disparaging of older people is reflected in a wider set of prejudices that result, not in rude words on Twitter, but in significantly different treatment.

One of the WASPI arguments (albeit not their strongest) is about work. Or rather that women in their 50s and 60s find it difficult to find work:

Living longer inevitably means working longer too. But that’s no help to older women who can’t just grit their teeth and work longer as a result of Osborne’s measure, because they’re not even working now: women made redundant late in their fifties, who can’t persuade employers that they’re not past it;


Now I'm happy to believe Gabby Hinsliff here. I want to believe her. But I find it difficult to find much real evidence that older people can't find work. The number of people over 65 working in the UK has nearly doubled since 2008 hardly an indication that the people made redundant in their 50s will fail to get a job. What I do suspect is that men and women who leave management or professional positions in their 50s find it hard to get a similar job on a similar wage - I've known people who had very senior jobs really struggle to get new employment. For a few there's also the issue of declining health. But there remains something of a cult of youth reflected in the attitudes of the, mostly younger, recruiters.

In short, faced with two equally qualified candidates the recruiter will pick the younger one - "they'll fit in better", "more scope for development", "planning for the future". All quite understandable until you think about the actual facts. The average time people stay in a given job has been falling for years - Forbes reported that 'millennials' (can I say how much I hate that unhelpful term) are switching jobs every 4.4 years. So if you've a well-qualified 59 year old woman in front of you, don't think 'she'll be retiring soon', think 'up to eight years contribution from a really experienced person - more if she wants to stay longer'.

Another, more subtle piece of ageism, is a political act - typified by former MP, David Willetts in his book 'The Pinch':

David Willetts shows how the baby boomer generation has attained this position at the expense of their children.Social, cultural and economic provision has been made for the reigning section of society, whilst the needs of the next generation have taken a back seat. Willetts argues that if our political, economic and cultural leaders do not begin to discharge their obligations to the future, the young people of today will be taxed more, work longer hours for less money, have lower social mobility and live in a degraded environment in order to pay for their parents' quality of life.


It's hard to see how we reconcile this polemical view of my generation - selfish, greedy and so forth - with the WASPI victimhood or the anecdotes of declining income as older people take the only jobs they can get, well below their skills and experience. Yet that is what's happening - we're told (with good reason) that more and more of the government's spending is directed towards the old and we're supposed to get agitated because some how this is an imposition on the young while at the same time the established image of the poor old folk struggling away on a pittance sticks in the public's mind.

And yes it's true that we should stop with this emotive nonsense about 'the family home' or 'life savings' and expect older people to use that money to look after themselves. It really is an imposition on younger people to expect them to provide for older people just so they can pass on loads of expensive assets to their children and grandchildren. Indeed this is the only proper response to the issue starkly described by James Delingpole writing about the NHS:

That’s the good side. Now the bad — and it’s so bad I’m surprised it isn’t more of a national scandal. We read a lot about a service stretched to breaking point but what few of us grasp — I didn’t until I saw it myself — is perhaps the main contributory factor to this: bed after bed occupied by elderly, often Alzheimer’s-afflicted patients who simply don’t belong in wards designed to treat acute, short-term conditions.


Round about 75% of all the money spent by the NHS is spent in one way or another on the elderly. It's not just the 'bed-blocking' Delingpole describes but the industrial quantities of medication that the average pensioner chuffs down everyday, the repeated visits to the GP and the collection of special tests, injections and clinics directed to pensioners. All of this - except the de facto role of hospitals as old folks' homes - is entirely justified since it means more and more people living happy, healthy and active lives into their dotage.

Not only are those old people expensive but there are also more and more of them selfishly and greedily staying alive longer and longer. And this will carry on (perhaps with the exception of rock stars whose lifestyles perhaps preclude longevity) as our contemporaries - I speak as one of those 'boomers' - dash about filling up theatre seats, cruise ships and tea shops while driving carefully within the speed limit in front of the next generation of future selfish old folk.

Now I know a lot of young people will go 'ewww' at this but they've to get used a world quite unlike the one I was brought up in - a world where fashion, music, food and drink, art and travel markets are dominated by the middle aged and upwards and where 'youth culture' is a minority sport in every sense of the word. And this isn't because we've sucked up all the cash but because there are loads of us, we've earned a load of money during our lives and the bit of that cash we've got left we're planning on spending living well.

The ageism that Gaby Hinsliff alluded to in her article about the WASPIs may indeed be the case (although it's hard to find solid evidence for it) but it's a fact that's days are numbered. Not because of some sort of national campaign or shouty MPs but because the market tells us you'd better start respecting older people if you want to stay in business.

There's a bar in Harrogate called (creatively) The Blues Bar and it does more or less what it says on the tin. We're there listening to some good blues rock and, looking around, the whole audience is our age or older - no plaid, no slippers and no comfortable stretch slacks but rather jeans, casual shirts and even the occasional band t-shirt. This is the reality of 21st century ageing.

So however po-faced David Willetts gets, I'm convinced that he's wrong. Us 'boomers' do have a duty - it's not to subsidise the next generation or to get trapped in an inter-generational version of the lump of labour fallacy but rather to have as good a time as possible in the two or three decades left to us on this earth. To travel, to party, to eat, drink and enjoy the bounty of the great world we've helped create - we are the richest generation there has ever been and we should enjoy that wealth rather than find reasons to say 'it's not fair'. The next generation, without a shadow of doubt will be even richer than us, will live even longer and - I hope - will have an even better time with their last couple of decades.

We've a long way to go yet. Organisations like Age UK (and the WASPIs for that matter) are still stuck playing the 'poor old folk' card when in large measure that simply isn't the case at all. For sure, there's age discrimination - from nasty little quips on Twitter through to the difficulties redundant managers have in getting jobs - but in the place that really matters, in the consumer markets, older people are the kings and queens. Let's enjoy it!

Yes, it's a miracle, really, that us boomers (I'm a '49er) are living so well. According to the gospel of Tobacco Control, we should all be dead (or at least dying), given that we all grew up in a fug of that deadly toxin, tobacco smoke.

Which of course should mean that the current generation, growing up as they are in this wonderful 'smoke-free' environment that TC have engineered for us will be on course to live to about 120 or so.

Oddly, though, given the preponderance nowadays of things like childhood asthma, allergies and food intolerances, to mention but a few (things that we as children never seemed to encounter) I rather have my doubts that they will even enjoy the good health and longevity that us boomers do.

Oh, and I'm still working (for myself, as I have done for the past 35 years), and have no intention of retiring in the foreseeable future. Indeed, I'm still making long-term plans.