Drink, smoke, vape, eat fast food? You're not welcome in the Labour Party 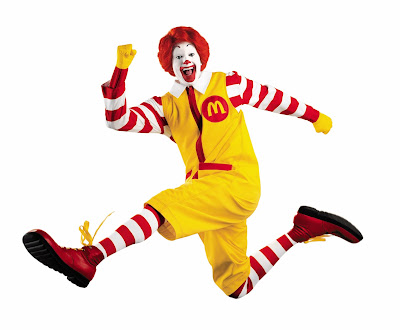 I don't know about you, dearest reader, but I'm not at all surprised to read that the Labour Party has turned down the request from McDonalds to open a 'pop-up' restaurant at the Party's annual conference. I am slightly surprised that the Party hasn't issued a lengthy, slogan-ridden justification for the refusal but this leaves us open to speculate as to the reasons.

Top of the list of reasons will be some sort of ideological objection to Ron and his burgers. After all the modern Labour Party does ideology, near everything is washed through the sieve of adopted political constraints. And, as a massive multinational fast food retailer, McDonalds is going to be pretty far removed from adherence to the Party's virtuous views on employment rights, public health, taxation, advertising and, of course, the children.

Right now, however, Labour is hiding behind it being the sort of 'commercial' decision they don't discuss in public. Meaning that we can tell the truth about the party - it's run by a bunch of right-on, snobby hippies who are just a bit uncomfortable with the sort of eating habits that those ordinary voters get up to. Especially the fat ones.

As we discovered from some 'research' by lefty politics professors, the left in Britain is no longer a party of the people who drag themselves bleary-eyed from bed in the morning to go and work in a regular sort of job - whether answering the phone in a call centre, making interminable cups of coffee for slightly rude people or flipping burgers for other ordinary people to eat. The sort of people who are active in the Labour Party simply don't do these sorts of jobs, they work doing public health campaigns or equalities monitoring in the public sector and third sector. Labour's enthusiasts are filled with righteous passion for banning fatty, sugar-filled and meat-ridden food (for the sake of the children, of course) and find the persistent preference of the regular worker for fast food, cigarettes and cheap lager slightly distasteful.

Here are those professors on who the left are today:

"This is where I think some of animosity is coming from and the electorate is saying we count too."


These are the people who Labour leaders will turn to ahead of tuning their ears to the worries of people with regular sorts of job in the private sector. For sure there's shouting about 'zero-hours contracts' that most working folk aren't on. There's stuff about trade union recognition that was relevant in 1880 but isn't today. And there's a load of cant about 'local economic strategies' that just means fewer of the shops those working people want and more for the well-paid, caring, gentrifying Labour supporter. Those Labour fans think they're sticking it to the man by going on protest marches, signing petitions and sending affirmatory messages to each other about Evil Tories or their own self-righteousness.

Truth be told, most people - let's call them the working class - don't have the time or money to spend on marching through London waving badly written banners about saving the NHS or banning tax havens. And even if they did have the time and money, I'm pretty sure they'd rather spend it taking the children into town for a film and a meal out (perhaps at a McDonalds) or, for those who've managed to offload the kids, a couple of pints and a burger somewhere disapproved of by the sort of judgemental snobs who sit on Labour's NEC.

Although there's a tenuous connection between today's Labour Party and the old unionised working class, the Party hasn't made the slightest effort to connect with the new working class - the one's who're working (and eating) in McDonalds, blowing vapour and buying the biggest, cheapest pizza in the supermarket. The Conservative Party at least has an excuse (not a good one but, nevertheless, an excuse) as it's always had a tendency to see the working classes as, well, a bit common. What's happened is that the same slightly disdainful attitude is now a dominant ideology in the Labour Party - the habits of these people need to be changed for their own good (and, one guesses, so they can be allowed into the sort of 'polite society' inhabited by the typical Labour activist).

People who drink beer (the cheap session beer they sell in working mens' clubs and discount supermarkets), smoke, vape and enjoy fatty burgers or sugary sweets, these are the people who aren't welcome in today's Labour Party. Indeed, it's hard to think of anywhere that these people - millions of them - can find a political place that doesn't treat them like some sort of pariah. It's a sad state of affairs when the persistent lobbying of a few - a tiny few - fanatics has resulted in the lifestyle choices of millions being condemned as unhealthy, unsightly and unfavoured.

You know which party welcomes beer drinkers don't you? Love 'em or hate 'em, it's UKIP.

I have a similar story concerning no fun leftie types.
For a few years here in the Isle of Man, one man band overseas aid charities, church groups and the like have run a ‘global village’ behind the main field on Tynwald Day, our national day, in a modest effort to get people to think more about the developing world. Despite our offer of a free place, the major green and overseas development groups have preferred to pay for stalls on the main field - less interested in spreading their message than coining hard cash and ensuring continued government funding, it would seem.
This year’s main field is restricted to commercial and food stalls, so the ‘professionals’ have been shunted in with us. No problem – the more the merrier and at last a concerted effort to get the good word out.
Sadly not, for it appears the ‘professionals’ do not ‘do’ democracy or participation.
Last Saturday I learnt that stallholders on our ‘alternative’ field must not give out balloons to kids as Friends of the Earth deem such frivolity environmentally unsuitable. There can be no discussion. FOE and other major agencies have enough friends in Manx government to make it not just a condition of their participation, but of the government setting aside any space for us weekend dabblers in philanthropy.

"Indeed, it's hard to think of anywhere that these people - millions of them - can find a political place that doesn't treat them like some sort of pariah."

It's not that hard, unless you try hard to make it so: as Dr Evil says - UKIP, but not only beer drinkers. Wine drinkers, spirit drinkers, soda drinkers, smokers, vapers, fat eaters, salt eaters, sugar eaters are all welcome.

1 July is National Smokers Day - feel free to light up ...

Not only beer-drinkers, Dr Evil, UKIP welcomes the smokers, vapers and burger-eaters etc. without discrimination too - more importantly, it welcomes all folk who want to get out of the EU, unlike none of the Lib-Dems, Greens or SNP, most of the Conservative Party and the Labour Party (well, this week anyway).
UKIP is the 'Ronseal Party', it does exactly what it says on the tin, which is more than any of the others could legally claim under the ASA rules.
Vote UKIP and Vote Leave - it's the only game in town.