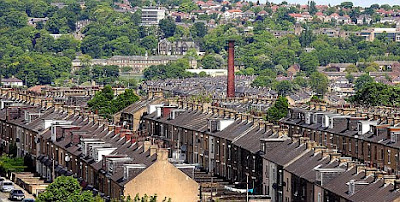 For many people in Bradford the 7th July 2001 is a date that brings back dreadful memories. Forget about the declining textile industry, the struggles of our city centre and our poor education system for a second - the one event that most damaged our city's image and reputation happened on that day. A small section of the City's population, in one relatively small part of the city rioted, looted, wrecked the livelihoods of local businesses and turned Bradford into a byword for segregation and racial tension.

And it was a small part of the city - from Westgate and White Abbey Road up to Carlisle Road, along Oak Lane and a part of Manningham Lane. I could walk you round the sites of that violent day, show you where the pubs and car showrooms were burned out, point to the shop that before that day was one of Bradford's oldest Polish delis and show you the spot where burning cars scarred the surface of the roads. That walk would take - with stops to reflect on this damage - perhaps an hour. Yet ask someone from elsewhere about our city and, chances are, that something referring back to that day will come up - perhaps a reference to our large Asian community, to crime, or drugs, racism or segregation. Even today, as the recent anti-semitism row shows, we allow the vocal presence of a large minority community - Asian Muslims - to dominate the discourse about Bradford.

There were two major reports commissioned into the riots, their causes and their consequences - one from Sir Herman Ouseley (Community Pride, not Prejudice) and one from Ted Cantle (which had a wider remit by looking at events on the same day in Oldham and Burnley). Cantle coined the term 'parallel lives' to describe communities in these places and, since Bradford was the biggest and most high profile of these riot-torn places, his characterisation of our city as a place divided became the basis for how elsewhere viewed Bradford.

From Cantle's work came the idea of 'community cohesion', a sort of catch-all phrase to cover working to reduce 'tensions' alongside the old concept of 'community development' and ideas around race, faith and integration. The premise of 'cohesion' is that it is an antonym of 'segregation' - cohesive communities are where different cultures not just share a place but live together in a place. Some people chose to see this agenda as a rejection of multiculturalism, arguing that integration is essential to cohesion whereas others took Cantle's argument as a case for embedding that multicultural agenda further into schools, workplaces and the wider 'community'.

When Bradford Council's Executive first sat down to consider the response to the riots - in a terrible irony on the afternoon of 11th September 2001 - we knew that our decisions would be subject to central government scrutiny and intervention, not least because we were then a Conservative-led authority under a Labour government. The Council's leadership (or which I was then a member) was not happy with either the Ouseley report - commissioned before the riots - or Cantle's 'parallel lives' report. We felt, and still feel, that the description of Bradford was limited, failed to acknowledge the wider city and ignored reasons for riot that were not about segregation at all but more to do with drugs, crime and racist policing.

This is a long context for a response to Ted Cantle's comments yesterday in The Guardian that suggest somehow segregation today is worse than it was back in 2001:

Speaking to the Guardian 15 years after he called for action to reduce polarisation following violent riots across northern England, in Oldham, Bradford, Leeds and Burnley, Cantle said he was alarmed by the direction the country had headed since then.


Superficially the evidence for Cantle's argument is strong and is set out in the article - a growing number of electoral wards with a non-white majority, schools with a majority minority intake and 'segregated' workplaces. I fear that this tells us only part of the story, problematises race and provides justification for the race or culture based special pleading that is such a driver of division. There is another, more positive story. Here from the Centre for the Dynamics of Ethnicity (CoDE) at Manchester University:


What we have here is a very different picture from that presented by Cantle and others - rather than seeing the colour of people living in a place as a mark of division, we see the same process of dispersal from immigrant communities we saw for previous generations of immigrants. People from Indian, Bengali and Pakistani heritage, as more of them succeed in life, molve away from the dense urban places of their arrival (or, for many, birth) in the same way that the children of poor East End Jews moved outwards to Golders Green, Hendon and Mill Hill. These Jewish families did not lose their faith or culture but their otherness was diminished by the things they shared with their new neighbours. There is no reason to suppose that the same dispersal for Hindu or Muslim, Asian and Black communities will not result in greater rather than less cohesion.

The reason for those statistics and for the frightening agenda apparent from Chuka Umunna is that the past couple of decades have seen the most concentrated influx of immigrants to the UK in our history. Whatever we think about this fact - The Guardian reports 1.2 million into London alone (although these are defined as not "white-British" so could be white European I guess) - if we define the lack of cohesion by simply counting how many black people there are in a given place then we fall into company with racists. Moreover, we define people by the box they tick on an ethnic monitoring form (a pox on these things) rather than on what they actually think, do or say.

The South Asian population of Bingley Rural - the ward I represent - was 482 in 2011 (it has likely risen a little since then - so maybe 600) and was 164 in 2001. In a small way this illustrates this dispersal. This is around 3% of the population, yet we elected a resident of Pakistani heritage as a councillor this May. If I were to be blunt, I doubt this would have been possible in 2001. Of course there is racism, I met people who said they wouldn't vote for Naveed because of his race and faith but overwhelmingly people seemed to see beyond that fact to the person underneath.

The Guardian article - indeed much of what I read in the press about the affect or impact of immigration - fails to touch on the truth about integration. Just as people don't judge me as a Roman Catholic or my wife as Jewish (although we've some problems with this), we are beginning to stop judging people by their skin colour. We've a way to go with Islam - we still make assumptions about a woman in a headscarf, for example - but even there the extent of our experience and witness of what most Muslims are like is beginning to change how we view that faith.

The way in which Ted Cantle frames his argument - focusing on numbers and concentration rather than actual evidence of segregation - doesn't reflect the reality of immigration, integration and dispersal. There's nothing new about recent arrivals clustering together - this takes advantage of family links, community and faith institutions, and provides the necessary social capital to support the new community in a foreign environment. But every example of a new community has seen that concentration diminish as they become established. This isn't to say that there won't be continuing concentrations - Indians in Harrow, Jews in Alwoodley, Pakistanis in Heaton - but these places are no longer inward-looking ghettos but just places where a lot of the residents happen to be Jews, Hindus or Muslims.

We need to accept, too, that despite some of the more excessive claims for "multiculturalism" people's identity isn't fixed in stone and they don't remain defined by a few markers, birth to death.

Notably, a number of people are ex-Muslims and there would be more if not for social pressure and often threats of physical force. We need to have some police and other protection for such people if they want to "come out", I'd be surprised if there weren't thousands of atheists in the Bradford "community". Many of the refugees I met in my Citizens' Advice days were thrilled at being able to choose their own religion or more likely lack thereof, and it needs to be possible for everyone to choose their life without fear.

There is a case to be made for banning "cultural" practices, most notably cousin marriage. Let's not remember that we're not dealing with a fifth column, that the loudest and most reactionary "community elders" currently wield power in the community but there's nothing inevitable about that. If we acknowledge the right of people to choose their own life and challenge the bigots and what have you there's nothing inevitable about it.

Unfortunately, this is not being done. With one hand Dave demands that "traditionally submissive" women learn English. Of course, people should peak English and women are equal to men. Why, then, did the joined-up thinkers in government repeatedly cut funding for ESOL? We have problems, such as the pervasive antisemitism, but we have solutions if the government would care to use them, which it's not really doing now.