Trust the people (but only the smart, well-educated, urbane ones)


Some of you will have had the dubious pleasure of seeing broadcaster Terry Christian on the BBC's Question Time programme. Mr Christian is an ardent enthusiast for the UK remaining a member of the European Union and, in broad summary, considers everyone who doesn't agree with him to be imbeciles. One of our intrepid broadcaster's shticks is to chatter about how the Brexit vote was cooked up by (anonymous) very rich people who then conned the working class. In simple terms, Mr Christian believes that the working class are too stupid to be allowed out in public with something as explosive as a vote.

This belief that ordinary people do not have agency - can't be trusted to make decisions about their lives - is widespread. Here's a chunk from a post at Tom Paine's blog talking about an academic psychologist from UCL's Centre for Behaviour Change:


He doesn’t mean to be a monster and I don’t want to see him as one, but in his presence my blood ran cold. I was afraid of him. I was even more afraid of the way the earnest folk in the room laughed as he joked about the unintended consequences of various programmes to clean up the act of the idiotic, self-destructive great unwashed, I realised that I might be the only one there who included himself in the category of “the people” to be shaped as opposed to the smug elite doing the shaping.

What we have here is an entire research centre - indeed something close to a whole academic discipline - dedicated to the idea that people should be stopped from making (what the academics consider to be) bad choices. These are, as Tom Paine observed, nice people - smart, well-educated, urbane, the very sorts you'd want your son or daughter to marry. The problem is that they believe they know better than you do and, they argue, have the research to prove this. They also believe that, because they know better than you do, you should be prevented from making a choice that the smart, well-educated and urbane don't approve.

It is odd that, at a time when we celebrate the widening of the franchise in 1918, a whole bunch of people are putting serious effort into removing choice, freedom and agency from people. The Brexit vote, for many of the smart, well-educated and urbane, has been the tipping point as they rush headlong away from the idea of democracy (while bizarrely trying to pretend that a polity where voting can't change the people in charge is a democracy) or at least from the thought that ruddy-faced older folk - gammon is the term our smart folk use - from slightly tatty northern towns should have a say in what happens.

The result is illustrated by the BBC - home to lots of those smart, well-educated and urbane folk - 'debating' the proposal from one of their number that old people shouldn't be allowed to vote: 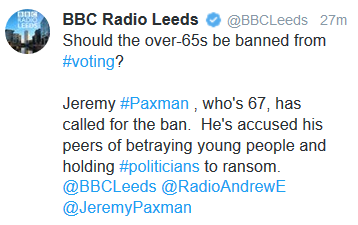 How dare people say they won't vote for politicians who ignore their interests!

There are two things going on here but both of them reflect a new version of Plato's philosopher kings - a superior cadre of leaders who are intelligent enough to direct society. In the case of behaviour - poor lifestyle choices, for example - these overlords want, in the manner of Brave New World, to make you have a (long) life of unstressed, bovine contentment and this requires them to direct the choices of the idiotic, self-destructive great unwashed.

With democracy - whether you're Terry Christian saying working class folk were conned or Jeremy Paxman suggesting old folk hold politicians to ransom - the problem is that people have started making electoral choices that our Philosopher Kings don't agree with. The only way out of this is to either have less democracy or else to limit the way in which democracy operates most obviously by limiting the franchise. Following the referendum there was a great deal of chatter (from those who didn't like the result mainly) about how this shows how referendums are a really awful idea and we should stop having them. We elect politicians (nearly all smart, well-educated and urbane Philosopher Kings) and they should make all the important decisions so as not to cause upset or headaches among the masses.

Part of the problem is that the smart, well-educated and urbane simply don't ever get near to the lives of most people - they live in a snobby world where no-one goes to McDonalds (junk food is bad and unhealthy) except, it seems, by accident:


I was at a workshop on Friday, and whilst driving back home, I stopped off at one of their restaurants in a service station. I'll put this comment upfront, especially given that I work in Public Health; I am not advocating fast food consumption. The options available in service stations are rather poor, especially when looking for hot food (I have found a way around this which I'll mention at the end!). What caught my attention though was the way in which McDonald's understand how to influence behaviour, strategies that we could look at when working in Public Health...But they also understand - in very fine detail - how their systems work, how each component part operates, and how these parts can be refined to maximise efficiency.

For the smart, well-educated and urbane, McDonalds is the enemy - despite (or maybe because) the ubiquitous hamburger chain serves about 3.5 million customers every day in the UK. McDonalds and its franchisees know far more about the ordinary folk of Britain than most academics - this is because it really matters to them as a business, getting the detail right means happy customers. The problem is that our visiting academic doesn't see a great business delivering good food to happy customers. Like Terry Christian with Brexit voters, our academic sees wrongness, exploitation, manipulation - a con. How dare ordinary people make such bad choices and, worse, be happy doing so.

What the Brexit vote uncovered and Corbyn's surge confirmed is that the smart, well-educated and urbane people aren't really all that keen on democracy. They're very keen on votes but these orchestrated events should be like electing the supreme soviet - everyone gets a vote, we're really excited about voting, there are campaigns, speeches, debates but in the end nothing much changes. Democracy should entail the possibility of - people should be able to hope for - a change in the rulers but this doesn't suit the courtiers.

At the core of this is this belief that people (other people who aren't part of your smart, well-educated and urbane circle) don't know what's good for them. These folk are the living embodiment of Douglas Jay's unintentionally honest comment back in 1937:


"...in the case of nutrition and health, just as in the case of education, the gentleman in Whitehall really does know better what is good for people than the people know themselves".

An alternative approach is 'No representation without taxation' - the only folk who should be entitled to vote are those who currently pay some amount in direct tax, e.g. Income Tax.

That would partly address Paxman's target by taking out a number of pensioners, but it would also remove the 'welfare vote' consisting of unwaged students, tax-avoiders, the terminally idle and perpetual spongers, all of whom only have a vested interest in what is paid out, not what is collected.

Sounds fair to me - but then I pay a lot of tax.

If your guy from McDonald's was really smart and well-educated he would know the difference between queue and what he wrote "cue".

Maybe old, maybe stupid, but still capable of driving at walking pace up all three lanes of the M1.

That would rule a lot of women out. Women still provide the bulk of unpaid, ie non taxable, care work.

What annoys me most is that idiot (for that is surely what he is – imagine: the success of McDonalds is that they have made themselves attractive to people! Wow! McDonalds sell things that people like to buy! Double WOW! His conclusion is double-cringe-worthy, too with a snobbery that has to take some beating) – that idiot is getting his, no doubt generous, remuneration from money that is extorted from me by threat, via the tax-man. (As are you, but we are at least given the option of changing that situation on a regular basis; that you are still here implies that people are generally satisfied with you.)

I doubt he is likely to go into establishments where a cue might be used – heaven forfend! – so probably is unaware that there might be another word of that pronunciation that is spelt differently.

Isn't it bizarre that the elite fails to see the irony in, on the one hand, demanding that we all show respect for each others' differences and, on the other, demanding that it has the right to fail to respect the right of individuals to make the 'wrong' choices?