For most people, having more money really does promote well-being - just not the privileged few who go to Yale 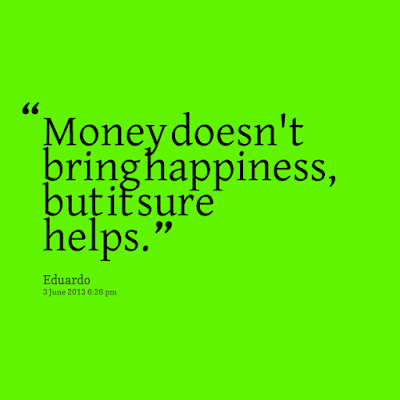 Who goes to Yale? I'm sure the official answer will be to say 'anybody' and them bombard you with diversity statistics and explanations as to how, despite sky high fees, America's third oldest college is ticky-boo when it comes to who goes there. The truth is that most of the people at the college are the children of wealthy and successful parents (and all of them pretty much are on track to be wealthy and successful).

Which makes what is dubbed "Yale's most popular course" something of a joke - at least to some kid in a mid-west town doing a minimum wage job:


When I asked Santos what she thought of the studies, she replied, “They’re important, but I don’t think they change the message of the class, which is that high wealth has a teeny effect on happiness. The key is that it’s way less than what we predict, and it’s a lot less effective than the other practices we suggest. ”

Practices like meditation, gratitude and making time for social connections have the biggest effect on our well-being, she says, adding that they’re much easier to attain than trying to bump past the $10 million mark.

Yes folks, Yale's most popular course is one telling rich kids not to be too rich (or rather that being more rich wont make you more happy). Note here how the woman running the course - Laurie Santos, a professor of psychology and cognitive science - frames the discussion: "...trying to bump passed the $10 million mark." If you're sat in a dingy flat wondering how you'll raise the cash to pay the rent and keep yourself fed, this course isn't for you now is it!

This is because the premise of the course is that you'll have plenty of money to spend on those things up near the pointy bit of Maslow's famous triangle - all that lovely mindful self-actualisation and what-have-you. For millions of people, this is pretty much a dream - it's not that they haven't got money, more that there's never a point when "can I pay the mortgage" or "I hope something doesn't break this month" aren't at the back of their mind.

There's nothing new in the idea that money can't buy you happiness (although one wag did say that, if you're going to be unhappy it's better to be unhappy with a million dollars). It's also true that, if meditation, gratitude and social engagement are the route to that happiness, being able to afford the time away from trying to keep body and soul together is pretty useful. What Santos is actually saying to wealthy people is 'invest your time on things that aren't about making money' - great advice so long as you've got the money and can free the time.

I always thought the saying was:

'Money doesn't buy you happiness, but it does buy you a better class of misery'