Whose beauty is it? If you want housing people like and want to live in you have to reform the 'green belt' 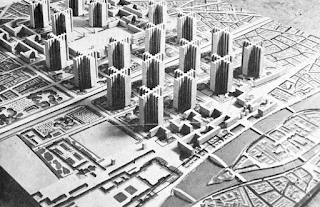 Jack Airey the housing expert from Policy Exchange has a piece on Conservative Home about how the prime minister has said that we should “emphasise the need, the duty, to build beautiful homes that people actually want to live in, and being sensitive to local concerns.”

Hard to take any issue with this except in that, as ever, it is difficult to say what is or isn't 'beautiful'. Airey argues that:


Despite existing to enhance public welfare, we seem to have created a planning system that sucks in money and productive energy at exactly the wrong points of the development process. Instead of being spent on beautiful design and good quality construction materials, huge amounts of money is spent by developers on consultants who can navigate the statutory thicket of our planning framework and on the acquisition of land at prices that are artificially inflated by local authorities rationing developable land.

There's no doubt that the cost of land - a direct consequence of planning rules that constrain its supply - has a profound impact on what gets built. Not only does it drive greater densities resulting in a less pleasing environment with narrower streets, smaller gardens and more hard surfaces but it affects the willingness of developers to build more attractive housing. And Airey is also right that the entire planning process gives little attention to aesthetics. Furthermore the nature of our planned system supports the dominant "buy-build-sell" development model rather than the idea of stewardship. The relationship between the developer and the buyer ends once the snagging list is complete.

My concern in all of this is mostly whose idea of beauty we are using? The urban design and architecture professions are filled with people who have a sneering, bien pensant attitude to suburbs - sprawl as they like to call it. At the same time the likes of the Town & Country Planning Association (TCPA), true to their Howardian roots, argue for new towns and new villages rather than the modest expansion of the towns and villages we already have. And at the back of all this sit the NIMBYs, most starkly typified by the CPRE and their argument we should "build more densely on old industrial land in the city".

The essays in Policy Exchange's work on "The Duty to Build Beautiful" include some interesting discussion of the role for communities in determining what is appropriate for their places. There's one essay suggesting that (as most communities faced with new housing would confirm) a lot of so-called community consultation is a sham - the developer has already agreed with planners how many houses there'll be and what they will look like. The problem is, however, in most cases - given almost all the most desirable development land has a 'green belt' designation - the very principle of development is contested. Even where that community has set out a neighbourhood plan this will often duck the issue of housing or propose unrealistic (and too dense) developments with the objective of minimising land release from that 'green belt'. In one of my neighbouring villages the Parish Council is consulting on whether people want large houses built - the PC's view is that big houses are a bad idea despite this being precisely what developers want to build.

Airey's article welcomes the proposed "total review" of planning regulations but I'm probably not alone in suspecting that this won't extend to considering the huge economic and social damage that is done by the urban containment policy we call 'green belt'. This isn't to say we should throw out all of the principles enshrined in the 'green belt' idea - recycling land, avoiding the merger of communities, environmental protection - but rather to argue that a blanket urban containment is the most damaging way to achieve these admirable aims. Moreover, the 'green belt' strategy doesn't, in most peoples' minds, perform that function but instead institutionalises 'not-in-my-backyard'. This acts to create, through regulation, artificially expensive housing in places where people want to live - I look with interest at proposals for land value capture but don't see anyone proposing to tax the main beneficiaries of urban containment, the people who live at the urban fringes or within the 'green belt'.

If we don't reform the supply of land and then insist on beautiful homes, we will struggle to meet the real aspiration of most people to own a house with a garden. Instead we will return to the planners' and architects' dream:


The way in which building design evolved in the 20th century led us to this place. It is driven by the manner in which Le Corbusier and others took an entirely functional view of humanity - folk to be stored, moved smoothly from workspace to homespace. The aesthetic wasn't scaled at a personal level but with reference to masses - how do we house millions efficiently, how do we make workplaces for thousands, not how do we make great homes for Mr & Mrs Smith. The result of this is our obsession - straight from Le Corbusier's soulless authoritarianism - with density and the sacredness of the countryside.

In the end, as I've written before, we need to reform the 'green belt' - make it smaller, allow greater weight to housing where need is clear, and exclude previously developed land from the category. Without this sort of change as well as a recognising the importance of space, especially garden space, we will continue failing to meet housing demand and, even if they look a little better, what homes we do build will satisfy planners not people, fund managers not families and investors not individuals.

We could do a lot worse than emulating the development pattern of the railway towns. They are all still seen as desireable places to live and their success was based at least in part on the recognition that once a town reached a certain size it was far bwtter to move another 3 miles out the transport route and start another town rathwr than endlessly sticking small developments on the edges.