Cities are great but maybe they're killing society. And us. 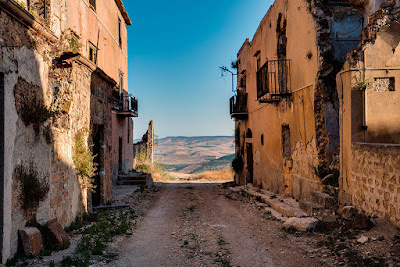 Cities are great. Filled with life, culture, activity, energy. Crammed with the bright and beautiful doing the exciting, creative, innovative things that will make an amazing tomorrow. Cities are where people meet, make friends, love and laugh. They're where the accidents of a busy world collide to make new busy-ness - without cities we'd be stuck in dullsville, poorer, weaker and less happy. Cities are incredible.

Cities are also a problem, one that we've seen revealed by the tragedy of COVID-19. For all sorts of reasons (and we'll look at some) cities exacerbate and worsen the impact of contagion. Heres' some early observations on the pandemic and poplation density from demographer, Wendall Cox trying to understand why New York has so many COVID-19 cases:

It is far harder for people living in a densely populated society to distance themselves from others and, as Cox concludes, "...it seems likely that extremely high densities and crowded travel conditions will be clear and determinative factors." Indeed, it looks right now that many of the worst hit places - New York, London, Madrid, Milan, Barcelona - are often places with very high densities, a reliance on mass transit and pre-WW2 urban forms.

To compound this, a study on the link between air pollution and susceptibility to COVID-19 has shown:


A small increase in long-term exposure to PM2.5 leads to a large increase in COVID-19 death rate, with the magnitude of increase 20 times that observed for PM2.5 and all-cause mortality.

This correlation suggests that the greater incidence of chronic respiratory disease (asthma, COPD, etc.) in areas with high levels of air pollution - chiefly those densely populated cities again - compounds with density to raise the likelihood of infection and mortality. The COVID-19 pandemic is, as Shlomo Angel as his team at the Marron Institute of Urban Management in New York have shown, "...by and large, an urban pandemic".

The challenge here is how we can capture the big agglomeration benefits of cities without building up huge risks in the event of future pandemic. Present policy is still concentrated on urban containment, transport modal shift, and densification - there is a presumption that people, especially younger graduates, will continue to move away from small towns and rural areas into cities and that their needs (housing in particular) will be met within the existing urban developed area.

Most urbanists argue that shifting travel patterns away from private vehicles to mass transit, walking and cycling, facilitates greater density in urban development by reducing road space and the need to provide for private car parking. Whether we have the Create Streets approach of mid-rise housing on existing road footprints or the modernist approach of high rise apartments set in open space, the presumption is that we can meet current and future residential needs without needing to expand the city's land area. And, the economic gain from cramming thousands more young clever people into the existing geographical footprint are set out in the idea of aggolomeration - that the more opportunity for those young clever people to meet, exchange ideas, interact and create, the better it is for economic growth. Today's urbanists compound this idea by further arguing that this process of containment and denisfication coupled with modal shift is also an essential response to concerns about climate change.

Contrasting with this happy combination of supposed economic and environmental gain from urban containment and densification, is a growing concern among sociologists and political scientists that this policy platform - even when, as with the current UK government, it's washed with a sort of bucolic passion for good design - points to a series of problems that start with unaffordable housing and flow through to job insecurity, delayed family creation and loneliness. A sort of urban ennui sets in where the social and cultural appeal of urban life loses its charm as money worries, cramped livng conditions and long work hours sit front of people's minds.

Mary Harrington describes in a recent article, at least partly referencing her own reasons for leaving London, how the realities of urban life for many young, clever people are very different to the myth of the Great City of the West. Mary describes a "...socially-liberal, economically aspirational graduate precariat, clinging to the big-city dream while scraping a hand-to-mouth existence in cramped, expensive shared housing." You get a feeling that many of these clever young graduates feel trapped - they've a decent job on the face of it, all the cultural wonders of the big city to go at, but no prospect bar a lottery win or a fortuitous inheritance from an unknown relative of affording a stake in the city and, living in a tiny shared flat, little chance of settling down with a partner and maybe starting a family. But for this liberal, aspirational precariat, leaving the big city - London, New York, San Francisco, Sydney, Madrid, Milan - seems an admission of failure.

This - and the revelation that expensive crowded cities are not great places to be during global pandemics - is why we need to look again, to even help create, a new suburban vision, what geographer Joel Kotkin calls a 'new age of dispersion'. The trend of four decades is shifting as people evaluate the need to live in expensive big cities, an evaluation filled with thoughts about house prices and facilitated by the capacity to work remotely. Indeed, one forced experiment of the COVID-19 pandemic has been getting millions of previously office-bound people to work from home. Some writers like Luke Beirne are even suggesting that technology will make the city redundant. And places far from those great cities like Tulsa are looking to make the case for their quieter, calmer, big-hatted lifestyle to those remote workers by offering direct cash incentives for them to relocate to the Oklahoma city.

If those great cities are to respond (and they have the resources to do so), they will have to do so by looking beyond a good paycheck, some fancy bars and an opera house. Yes, young people want those things but they also want the progression their parents had - chance of a house to buy on a good-sized section with a decent garden and good school, a community structure that is family- and child-friendly and probably an end to the "we hate cars, cars are bad" ideology that dominates so much urban thinking. All this means building new suburbs, means ending urban containment and means looking at how we make use of new technology (from drone taxis and driverless vehicles to new homes wired up with video conferencing).
....

'Twas ever so. I recall a documentary fronted by Mary Beard who said of mortality among residents of Rome that the city more or less ate people. But country dwellers flocked to Rome because (1) they would be better off than in the country, and (2) there was more chance of making it big in Rome. Life is a matter of trade offs.