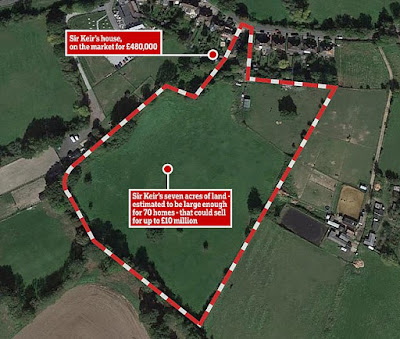 The Mail on Sunday in true "let's not let facts get in the way of a good story" style is having a pop at Labour Party leader, Sir Keir Starmer:

He has always been keen to play down his privilege and play up his working-class roots. But Sir Keir Starmer owns seven acres of land that could be worth up to £10 million, The Mail on Sunday can reveal.

The Labour leader acquired the property, on green belt next to the Surrey home where he grew up, in 1996, while he was working as a human rights lawyer.
Complete with aerial photographs neatly 'red-lined' to show the land Starmer owns, the Mail's story is filled the idea that somehow this land, bought by the Labour leader some years ago "...to house donkeys that Keir’s parents rescued and cared for...(a)fter his mother lost the ability to walk, the field allowed her to still watch the donkeys from her home", is worth untold millions. The land in question is green belt and was purchased back in 1996. Right now similar land in Surrey (Green Belt pasture) is selling for about £15,000 per acre meaning Sir Keir's seven acres is worth a little over £100,000. It's proximisty to the town might make it a little more valuable, so let's be kind and say £150,000.

So where does the Mail get its price tag of £10 million from? From the estimated uplift were the local council - run by the Conservatives and without a single Labour councillor - to remove the land in question from the Green Belt and allocate it for housing:

"It does not have planning permission, but the local council is under pressure to provide thousands of new homes, and has accepted it must sacrifice green belt to meet targets. Families living near the field fear Sir Keir might one day sell it and worry that any future development will transform the area’s character."

The thing is that Tandridge Council has an adopted local plan that, disappointingly, doesn't make Sir Keir into a multi-millionaire at the stroke of a planner's pen. But what the estimation given by the Mail's pet developer (‘worth a lot of money, probably around £1.5 million per acre, so you are looking at £10 million in all’) shows that this pen stroke multiplies the value of the land by nearly 100 times. And it doesn't take very long for us to appreciate that here in a donkey sanctuary is the reason why the Green Belt is such lousy policy, indeed why it is the main reason for places like Surrey have such overpriced housing.

The x100 increase in value reflects unmet demand for land and so long as releases from the Green Belt are trickled out by the planners (and politicians who don't want to upset neighbours who worry that "future development will transform the area’s character") the result will be that housing remains unaffordable and young (and not-so-young) people will stay in private rented homes because they've no real hope, short of inheritance or good fortune, of having the cash to buy.

This is the price of the precious Green Belt. Land like Sir Keir's donkey sanctuary remains underused and generating little value while planners urge unsustainable, expensive and unpleasant high-rise developments as the only way to meet need. If there were no Green Belt, Sir Keir's land would be worth more than £150,000 but not 100 times more - perhaps double at best. And, you know, a lovely local builder would pop along, buy it and build some good quality family homes that will be help keep Oxted's community sustainable while housing some of those people stuck unhappily in cramped flats. Scrap the Green Belt.

As a former Tandridge District Councillor I find this subject has much nuance, I'm happy to see some land released for development, but I'm sceptical much needed supporting infrastructure will come with it.

The problem with doing away with Green Belt altogether is that developers will take beautiful countryside and spew out acres of concrete topped with characterless McMansions serviced by roads that are little more than country lanes, with no decent public transport, and intended for people who will drive their Chelsea tractors to the under serviced train station every day for the London commute on an overcrowded train. This is not fear mongering, I have seen such plans.

In truth there is a fair bit of brownfield land suitable for development, and a fair bit of genuine low grade green belt, and I don't include the common wheezes which tries to pass off parks and playing fields as low grade land, but as you say developers eke it out slowly to ensure scarcity and high prices.

The new local plan, which I've followed with interest, and which caused the Conservatives to lose overall control of the council, has much going for it. Where it will probably fail is that once developers have their permissions, there will be little to stop them eking them out slowly. The newly released land should come with use it or lose it clauses. If they don't deliver units quickly it should be subject to compulsory purchase at the agricultural rate by the council, who can then co-opt the windfall profit the developer would have had.