On that suburban livestyle dream (and why planners don't like it) 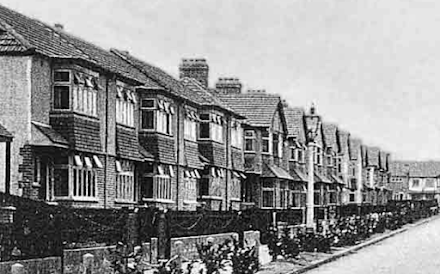 “Off they went, the two of them, both with their beautiful old houses and even more soulful gardens, on the emptiness of the suburban dream. All about what a crime the destruction of the countryside was, and not one word about what those houses, those small plots of land, might mean to those who owned them, let alone the fairness of distributing a little to many rather than sticking with a lot for a few.”

This quotation comes from a piece in LitHub by Suzannah Lessard entitled “Why We Hate the Suburbs” and describes a conversation in exurban New York with friends and neighbours. It captures for me the way in which a certain sort of educated, privileged person dismisses suburbia without realising how this isn’t simply an attack on the aesthetics of suburbia but assaults the lives and culture of the people who choose to live in such a place.

Lessard then observes how progressives share this hatred of suburbs with old money and the aristocrat and explores why this might be the case. For me the obvious truth here is that progressive thinking, especially in academia, is dominated by the privileged, progressives make common cause with an ancient feudalism because they are part of that feudalism, it is what made their idle, speculative yet well-rewarded life not only possible but esteemed.

Suburbia, and the portrayal of the people in those suburbs, has been a subject of sneering condescension since the first eager pioneers ventured out from the unhealthy and unpleasant European inner cities in the late 19th century – a departure made possible by the train and a liberalised land ownership. Places like Sydenham, Blackheath and Islington, for all that we now see their Victorian terraces in yellow London stock brick as iconic, were the subject of the same sneering outlook as Malvina Reynolds had for “Little Boxes” in 1962 and films like Vivarium do today. These critics are saying, “look at those dreary people in the suburbs” hinting that their lives are something shallow, selfish and inward looking. Historian, Simon Schama uses this sneer to put down columnist Rod Liddle: 'turn your suburban face away from the plight of the miserable'. It is the dismissing of little people by a grandee, a grandee who considers himself not just materially better but morally superior to a person from suburbia.

The elite view is that suburbs are shit. The Twitter account “Shit Planning” invests a lot of time into sneering at the aesthetics of house extensions, at pragmatic decisions that offend his eye. Interspersed with this is a steady stream of “look at this suburban development isn’t it horrible” 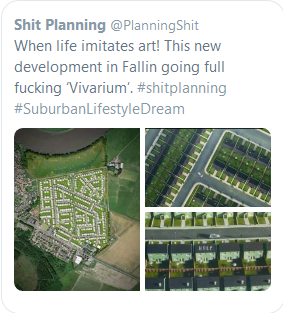 Despite this elitist disdain most of the critics, including Simon Schama, are the products of that suburbia. Some suburban experience will be from the peripheral council estates built after WW2 to replace cramped tenements, cold and damp back-to-backs and putrid inner city slums while others’ backstory will be of the 1930s three-bed semi that rolled out space and contentment across fields near railways into London. Yet still the distaste for the suburb persists, they’re places where people live out dull, ordinary lives, doing dull ordinary unexciting things like raising children - "raise the child and be released" is what the newcomers to Vivarium hear echoing that idea that bringing up children is a chore without reward done in a place without soul.

There is a disconnection between what people want and what the privileged, progressive and entitled believe we should have. As Joel Kotkin reminds us, suburbia reflects the reality of people’s choices – a house with a garden on a nice street with decent neighbours. The suburban dream may seem banal to grand people with grand ideas but that shouldn’t justify such people, as Kotkin remarks, imposing their bias on society:

“The urban gentry and intelligentsia, though, disdained this voluntary migration. Perhaps the most bitter critic was the great urbanist Jane Jacobs. An aficionado of the old, highly diverse urban districts of Manhattan, Jacobs not only hated trendsetter Los Angeles but dismissed the bedroom communities of Queens and Staten Island with the memorable phrase, “The Great Blight of Dullness.” The 1960s social critic William Whyte, who, unlike Jacobs, at least bothered to study suburbs close up, denounced them as hopelessly conformist and stultifying. Like many later critics, he predicted in Fortune that people and companies would tire of them and return to the city core.”

The old feudalism held that the great and good should direct the life and labours of the majority. Beyond a few personal chattels, this majority would not be owners, especially owners of land. Vast swathes of the country would be set aside as protected – not for the ordinary man’s pleasure but for those great and good to enjoy. Where people live wouldn’t be determined by their preference but by the requirements of the feudal lord or latterly the industrial mill owner. And those ‘mere uncounted folk’ as Kipling called them, would leave little mark on the world beyond, at most, a carved name on a gravestone now grown over with weeds.

Suburbia was the inevitable consequence of people choosing. I remember reading the biography of Body Shop founder Anita Roddick where she talked about always wanting a house like the one a child would draw and this reminds me of how suburban design (or at least the best of it) seems to mimic this childlike desire for a house that looks like a house. Those rows of identikit houses, those little boxes, aren’t soulless at all but express the reality of childhood dreaming. Yet the sneering classes still see suburban life, despite its desirability, as wrong – ‘ticky-tacky’:

Your life, such people say to the suburbanite, is dullsville. What you do for pleasure – golf, caravans and the like – are naff and your tastes (Berni Inns, Pringle sweaters, patterned wallpaper) are low status. Yet this is not just the life most people enjoy but it is the life many others aspire to enjoy – room to breathe, a place to park the car off the street, a garage to fill with the kids bikes, power tools and old plastic toys, and rooms big enough for everyone to sit comfortably. People will fill these homes with the material possessions our progressive elite sneer at but still buy – giant fridge freezers, huge wall-mounted TVs, - and the things they like: bottled lager, wine boxes, good white bread and mature yellow cheese, chocolate and shop bought cake.

Suburbia works because it provides a scale and form that fits the way humans prefer to live – every time people are asked what sort of house they want and what sort of place they’d choose to live, a majority describe suburbia: a single family home on its own plot, good neighbourhood schools, plenty of activities, all close enough to the city so as to allow a trip into town for entertainment. Only the planning and architecture professions seem to believe that either this isn’t really what people want or else that this lifestyle is terrible for the economy or society or the environment.

Suburbia provides a compromise between the city and the countryside. The latter appeals as we drive through it and see the lovely old cottage in a little hamlet or the sturdy old farmhouse halfway up onto the moor. And this bucolia lasts until we want a doctor or think about schools or popping out for some milk. For the city, the buzz of a frenetic social life with bars and restaurants, theatres, museums, and people, lots of people. Then we look at the little flat we live in with the noisy neighbours and the constant drone of the streets, where you’d not let a small child negotiate a journey to school. Off to the suburbs where there’s enough population density to sustain places to eat out, cinemas and convenient shopping but it’s spread out enough you can live in your own space. Yes, you’ll be better off with a car to get about but this is OK and a small price to pay for a well-paced live, a stable community, and a place for your kids to grow up safely and your parents to age contentedly.

"It captures for me the way in which a certain sort of educated, privileged person dismisses suburbia without realising how this isn’t simply an attack on the aesthetics of suburbia but assaults the lives and culture of the people who choose to live in such a place."

The influence of the Bloomsbury Group on town planning in the 1940's in the UK,where snobbery led to the expansion of major cities being prevented by planning law,leading to the development of current social problems including over crowding and high property prices should not be under estimated.

Age five I moved from a wartime "hut" with water gathered from a cattle trough and lavatory a bucket under a plank with a hole in it. The bucket contents were taken into nearby wood by my father and buried.
We moved to a semi council house in a scheme of similar.We and all our neighbours then turned front gardens into wonders of neat hedges and flower beds. All by acquiring cuttings and swapping bulbs, tubers. Back gardens into small grass, "green" and the rest for rows and rows of vegetables.
Unbeknownst to me I had moved into Suburbia. And I loved it.
Lots of friends. Parks, playing fields, library, church and countryside, and later cafes and pubs a walk away and then a bike ride away.
Children were safe anyway, but every neighbour looked out for them, and also chastised. Local policeman was known, as was his house and he was trusted. Any erring juvenile was taken to parents first.
Sixty and more years later I still like to go back. The parents are all gone, and a lot of friends moved away, but still a few are still there and the comforting ambience gets me.
I follow the local community facebook page and am grateful.
How banal.