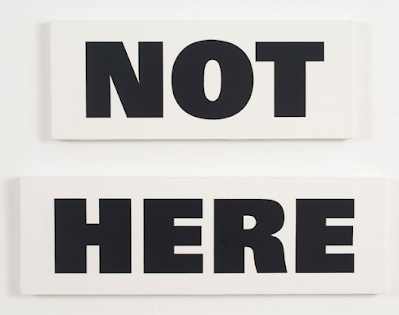 We have a housing crisis, an energy crisis, a social care crisis, a spluttering economy and an inefficient health service. Our transport system creaks, cities clog up with cars and attempts to make them more pleasant quickly fade away. We can't sort out our prison system, provide better care for looked after children and make the UK a genuinely fair and supportive place for refugees. Our rubbish piles up in the wrong places and we dump it overseas on poorer communities. Small businesses struggle with recruitment, tourist places can't find the staff and businesses can't expand.

There's a simple reason explaining all this - the NIMBY. We live in a society where any form of personal inconvenience or reponsibility has to be removed by government. No you can't build those new houses there - build them somewhere else. No I won't let you drill for gas near our village - there might be lorries and smell, we don't want that. No we won't pay for our own care from the 100s of 1000s in property assets we own because we've stopped new housing - get workers to pay with their taxes. No you can't pedestrianise the high street - I want to park right next to the shop. I won't let you build a cycle way or a bus lane, it might add 90 seconds to my journey. What do you mean, you want to allow people to use the street to eat dinner when I might want to drive my car down it twice a year?

Don't build that new prison to replace the overcrowded, violent mess of a jail in the city - it might disturb some birds that we're told live there. And we won't let you build a bail hostel or a children's home near us - think of all the burglary, the anti-social behaviour. This is a nice community - this sort of thing won't fit it. Asylum seekers? We're going to march and petition to stop them you know, we don't want dark skinned foreigners round here - no to a refugee centre!

I don't care what happens to the rubbish that I put in my bin, the bin the council empty every fortnight. Except that you can't build an incinerator that will put that rubbish to good use by generating electricity. And I don't want a wind farm on the hill up there either. Or a nuclear power station. Or any kind of generation. That can go somewhere else. What do you mean, of course I expect the lights to go on when I flick the switch.

This is a nice market town you know. Building some old people's flats in the town centre is wrong. That's where we want to park our cars so we don't have to walk more than 50 yards to do our shopping and meet our friends over a cup of coffee. Dump the old people on the council estate. And we don't want other sorts of flat either, especially not affordable ones for the sort of workers who serve us coffee. Now I'm here we should pull the ladder up and ban second homes rather than build new houses for our growing workforce.

I know that the brewery and the clothing people want to expand. But that means more ugly sheds and that will spoil the view from the fish wharf where we sit with our glass of pinot gris and a crab salad. So stop it. There's an industrial area ten miles inland, they can go there, much more fitting. What do you mean, where are the jobs for the kids growing up? We didn't start here you know, we worked hard, didn't buy expensive coffee and avacado on toast - kids of today expect everything on a plate.

A new road? Absolutely, I'll be able to get through town a minute quicker. But just a minute? Where are you putting the road, it can't go there, that'll mean more houses and more traffic, it'll spoil some "Grade One" farmland, upset a couple of badgers and annoy an owl. Plus my house value might drop, not having that. A railway station? Think of the traffic, more congestion. Can't people drive into the town to get the train. And we don't want one of those bus schemes - make my journey to the farm shop a minute longer...

We truly are a nation of NIMBYs. A nation convinced that everything can be sorted out - just somewhere else.

And yet the UK is dotted with disused railways and canals, mills and breweries, not to mention the odd pillbox.

As for generation, you could stick three Small Modular Reactors on the footprint of one of those inefficient whirly bird killers. But no, nuclear is Baaaad, despite having a much better safety record than any other method of power generation. I bet you could hide a functioning SMR under the old Millennium Dome on the QT and no one would notice. Yet 300Mw would power a good chunk of jolly old Londinium for ten years without a refuel.