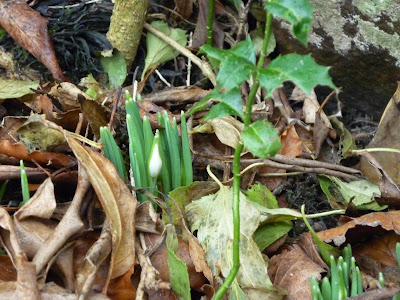 Spring is on its way, things are starting to wake up from winter's slumber. From resting out the deep cold. Growth begins - in tiny ways at first with the shoots of snowdrops and daffodils poking up through last years dried leaves, with the little pink buds on the currants and with the pale signs of future flowers now visible on the rhododendron buds.

However, winter isn't over yet - February, the month of snow, lies between us and the full flowering of spring. It may not snow - we might have got our measure with that hard, tough month of snow and frost before the New Year. But I wouldn't count on it - they aren't called snowdrops for nothing!

I've spent this morning in the garden. Just tidying, trimming and checking stuff out - plus shifting another ten barrow loads of leaves to a place where they can rot unmolested. And I was struck by nature's ability to spring anew - fresh from what seemed a dead world. The rhododendron our neighbours hacked back almost to the ground has sprung shoots - plus one or two buds. The big copper beech is lighter, somehow feels happier for having its canopy lifted and the roses - pruned right back before the winter - are showing how they'll grow again bringing with that growth those glorious flowers.

In our mad, rushed, tangled urban lives we find the seasons inconvenient - for many they've been replaced with 'climate control'. With systems regulated to provide an even temperature all year round. So we step safely from unvarying office temperatures, to air conditioned cars and from there to hermetically sealed, temperature controlled homes. Technology has banished the seasons.

So when those seasons fight back - when the winter throws snow at us or the summer delivers a heatwave - we moan and grumble. It is so sad that we - little ants scratting on the surface of a huge planet - think ourselves so important that the audacity of nature takes us aback. Why have the government not done something, we cry! It's getting warmer - it must be man's fault, we are after all so huge, so important.

Nature will win, dear reader. She always does - we watch helpless at floods, droughts and snowdrifts trying to pretend somehow we are at fault. We are not at fault - although it is perhaps the vengeance of Caradhras that we are seeing in these things. Nature is putting us back firmly in our place, laughing in the face of our hubris.

And then blessing us with new growth. Magic.