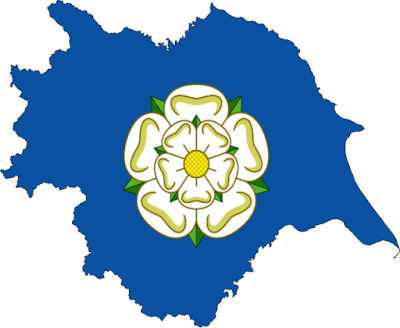 My eponymous great-grandfather was born in East London. Tragically he died young - in his thirties - leaving a widow and young children. He died in Wakefield.

This isn't some terrible story of loss or tragedy and nor was my great-grandfather one of those victims of industrial capitalism. He was a wine merchant. Not only is this a noble calling but it explains why he ended up in Wakefield. Put in simple terms there was better business to be had (and perhaps less competition) in Yorkshire than there was in London. As my boss, Judith Donovan, said to me when I arrived in Bradford on 27 July 1987 - "A hundred years ago, Bradford was the richest city in the richest county in the richest country in the world."

How things have changed. Now, too often, Yorkshire paints itself as a victim, bashed and battered by the tides of globalisation, ignored or patronised by the powers down in London. It is a theme we hear again and again from 'leaders' in Yorkshire - that somehow the economic gap between England's greatest county and those southern nancies is down to the perfidy of national government. London is rich because, as if by a dark magic, all the good stuff in England is sucked away from places like Yorkshire for the folk living in that huge city to spend on fancy bus tickets, overpriced coffee and criminally-priced one-bed apartments in Stockwell.

Yet the frustration is that Yorkshire has so much more to offer and that this region’s limitless potential will not be maximised until the Government invests sufficient sums in this county’s human capital – school standards have lagged behind the rest of the country for an unacceptable number of years and are having a detrimental impact on job prospects – as well as the area’s transport and business infrastructure so more world-leading companies can be persuaded to invest here.


Today is Yorkshire Day and it is worth giving the Yorkshire Post its due for setting out an agenda for the county that genuinely reflects much of the debate going on up here. But it's a shame that the habit of holding out the cap and fluttering those Yorkshire eye-lashes still remains. No-one's denying that Yorkshire - and the North for that matter - needs investment but when all they hear is the regional politics version of "got some spare change for a coffee" is it really a surprise that government doesn't rush to help out?

Take education. The Yorkshire Post rightly highlights how Yorkshire's levels of educational attainment lag behind those elsewhere in England and in many ways this is a scandal. But what's the bigger scandal - that politicians in London aren't throwing cash at the problem or that the leaders in Yorkshire haven't got any plan, policy or strategy to address the problem? Where's the education 'summit' bringing together political and business leaders from across the county? Why haven't local education authorities - along with schools - pooled their investment in educational development and improvement?

The same goes for transport. Again the Yorkshire Post reminds us that Leeds is the only big city in England without a tram system or metro. And that - quite rightly - the government pulled the plug on that city's latest wheeze, a new 'bus-on-a-string'. I recall sitting in a meeting - in some slightly tatty, anonymous office block in Leeds - and formally giving Bradford's support for what was dubbed 'supertram'. And I remember adding, at the end of the presentation, that it was a great shame said 'supertram' wasn't going to Bradford or, indeed, anywhere near Bradford. The single busiest inter-city commuter route - Leeds-Bradford and vice versa - didn't register.

So - again - where's Yorkshire's transport plan? Have the transport great and good gathered to set out how we'll respond to 21st century challenges in transport? Or have we just sat mithering about ticketing and real-time information as if they're the answer to the question? Why should - other than for reasons of political calculation (hence Cameron launching the 'Northern Powerhouse' in Shipley) - central government do anything for Yorkshire when Yorkshire's not doing much for itself?

Even on devolution, political calculations - both sub-regional and by the political parties - has meant deadlock. Yorkshire - after London itself - is the only English region with a genuine identity. Yorkshire Day really is a thing (my friend Keith Madeley and the Yorkshire Society deserve a lot of credit for this). We really did showcase the glories of the county through the Tour de France and its child, Tour de Yorkshire. And the county really does have everything - except, that is, the leadership to get on with devising responses to our challenges without waiting on someone in London first giving us the thumbs up.

I learnt a couple of important lessons recently. The first was during a meeting with Lord Adonis following the National Infrastructure Commission publishing reports on Crossrail 2 and Transport in the North. The lesson was that London had prepared, done the legwork, written a plan and set out how that city would fund half the cost in the time Northern leaders had drawn up a scope for a possible plan the content of which wasn't set. London will get the money because London knows what it wants. Here in Yorkshire we just ask for more transport investment - we have no plan.

The second lesson is that London's planning is far deeper - more granular as the trendies put it - than any spatial or urban planning anywhere else in England. In part this just reflects the fact that London is a city and has a coherence (and obvious centre) that Yorkshire doesn't have but it also demonstrates that our fragmented systems of government, business leadership and administration won't allow for that level of planning. Here's what I wrote in June about New London Architecture's exhibition:

During a brief visit to London, we called in to the New London Architecture exhibition at The Building Centre - it's just round the corner from the British Museum and well worth an hour of your time not least for the splendid model of central London at the heart of the exhibition. The NLA uses this magnificent visual to present a vision of the new London emerging through investment, initiative and development and is accompanied by a series of short films featuring NLA's urbane chairman, Peter Murray, talking through the challenges - homes, transport, place-making, environment - and setting out what's already happening and how built environment professionals including architects, masterplanners, designers, engineers and builders can deliver a better city.

What comes across in these films is the scale of engagement between public and private sectors - the projects highlighted on the grand model or featured on the wall around the space are mostly private sector projects. For sure there are the great transport schemes sponsored by London's government and supported by national governments but we also see investment in public realm, privately or in partnership with boroughs, by the great estates - Cadogan, Bedford, Grosvenor and the Crown - that enhance the City's character and variety.

Above all there is both a sense of vision - one shared by mayor, boroughs, transport chiefs and developers - and an intense granularity to that vision. We're so familiar with vision being just that - grand sweeping words accompanied with carefully touched up pictures. But this London vision comes with hundreds of individual projects, with emerging plans across the 32 boroughs (all pictured on the walls around the huge model), with examples of individual masterplans for smaller places and with specific project plans ranging from hospitals and university facilities through housing schemes to pocket parks or street markets.


The Yorkshire Post is right to make the case for the county and to present it to the Prime Minister. But we also need to make the case for bringing the county together, for a new agreement - with or without devolution deals - to work together on planning for Yorkshire's future. If - in some few years - we can take people to an exhibition put together by a private organisation demonstrating how Yorkshire's people, businesses, charities and landowners share a clear, radical and creative plan that is being put in place then we will be changing the county for the better.

I fear that, after a brief flurry of excitement and a modicum of political grandstanding, the Yorkshire Post's welcome initiative will be lost. Not because folk in Yorkshire don't want their county to be better but because we've not made our own plans for making the county once again, the richest place in the richest country. So long as we wait for handouts from London this won't happen.