This blog is entirely locally sourced 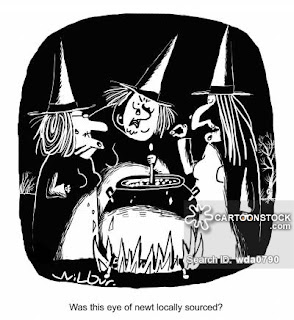 "All locally sourced!" You've seen it a thousand times from little cafes, delis, restaurants and bars. It's a necessary badge along with "fair trade" and "ethical" for these businesses to enter the world of the "independent" with all its promises of hipsterish splendidness.

But what on earth does "locally sourced" mean? It's self evident that it doesn't mean that the food in that cafe is "locally grown". Unless, that is, the weather in Bradford has shifted a little - the menu will include tea and coffee, cakes with exotic ingredients like cocoa and banana, and a host of other foods that have travelled to our city from all the corners of the earth like black pepper, cinnamon and chilies.

Perhaps "locally sourced" simply means purchased locally? But then how does this differ from any other business out there? Most of them are going to the cash-and-carry for basic stuff, maybe to St James Wholesale market for veg (not much lettuce is grown in and around Bradford either and there's a paucity of apple orchards) and to a local wholesale butcher. And anyway isn't going to Morrisons "locally sourced" too - it's a Bradford-based company after all!

It's clearly not about either growing food or selling food. So "locally sourced" must mean something else. The platter of "locally sourced" Polish sausage, dill pickles and smoked cheese uses product bought off the deli in the market rather than from some anonymous wholesaler. The product's the same - may even be the same brands - but we've got it from a bloke with a stall rather than watched as an eighteen-year-old pings it across a cash-and-carry checkout. This, we're told, is somehow better.

If you want my view (and that's why you're here at my entirely locally sourced blog) then it's that "locally sourced" is a bit of a scam. After all what to we mean by local? Here's the US National Restaurants Association (not to be confused with another organisation sharing the acronym):

The definition of local food for restaurants is a little stickier, considering it is not something that is regulated. Local can mean the food comes from around the corner or across the state.

“Every company that you’re going to run into is going to have a different definition for local,” says Jamie Moore, director of sourcing and sustainability for Eat’n Park, a Pittsburgh-based concept with more than 75 locations in Pennsylvania, Ohio, and West Virginia.

Moore and others agree that the rule of thumb adopted for local ingredients is that they come from within a 150-mile radius.

But is that really what we mean? It's pretty clear from our cafe example that the coffee, tea and cake ingredients aren't coming from within a 150 mile radius of Bradford. So we're still none the wiser as a consumer - it's not about growing locally not is it about buying locally. It seems to be about buying from other "independent" providers rather than from those dark and evil dens of capitalist sin that supply establishments selling stuff that's not "locally sourced".

It's pretty clear that "locally sourced" (at least in the context of shouting "All Locally Sourced!" on your website) is an almost entirely meaningless term given it doesn't mean either grown or bought locally but rather some more nuanced idea relating to these terms. I can understand locally sourced when my local butcher put up the name of the farms where he got his beef and pork. I can understand locally sourced when the bar says all its bread comes from the Ukrainian bakery a mile away. But saying "all locally sourced" is both meaningless and misleading. Little more that signalling the righteous virtue of the establishment and requiring very little of a different approach to any other similar place not claiming to be "all locally sourced".

We should challenge the ethics of these statements in the same way as, for example, people have questioned supermarkets using "farm" in brands of mass produced cheese or soup. By all means say "we buy locally grown food where we can and use small, quality local suppliers for as much as possible" - it's a bit rah but I get the sentiment. But taking the step from here to "all locally sourced" is to move for a description that can be evidenced to one that can't.

In the end our obsession with short supply chains (the locavore obsession with food miles and a misunderstanding of resilience) plus a sort of "aren't we good" brand positioning is, in part, responsible for weakening food security and undermining confidence in the - very safe - supply chains for the food us regular folk buy at the supermarket. The abuse of an ill-defined term like "locally produced" results in confusion for consumers - we are unable to say precisely what it means and frankly explaining that "I buy from Steve in the market" is no help as the chances are that Steve neither grows the stuff locally or buys it locally. All you've done is move the supply chain to someone else and claimed some sort of righteousness as a result.

Do you mean to tell me that Yorkshire tea is not grown near Bradford? Well I never!

I once ate at an Austrian restaurant where everything served was grown on the premises - pork, vegetables, fruit. I don't remember drinking any coffee. I was ver, ver drunk. The schnapps was distilled on the premises.

I remember getting annoyed about that billboard thing that went viral. It says something about shopping here (local shop) means kids get dance lessons and stuff rather than CEOs getting another yatch.
Like the children of staff in independant shops deserve better than the kids of Tesco checkout workers