British and American suburbs are very different - we should remember this when doing housing policy. 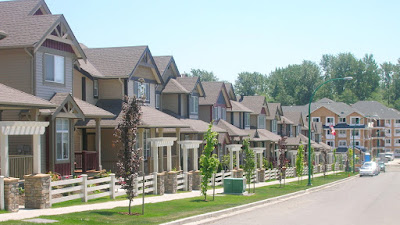 I am, as you know, a fan of suburbs. The best suburbs combine the attributes of the city - walkability, access to public transport (but not to the exclusion of cars), a variety of house styles and tenures build reasonably densely all combined with a sense of openness and access to clean, fresh air and even the countryside.

So it worries me when people write about housing development and, in doing so, repeat this sort of line:


“…sprawling communities of single-family homes that require a car to navigate are not what’s drawing people anymore. What’s popular now are places where people can live in mixed-use, multifamily housing—maybe an apartment building above a coffee shop—and walk, bike, or take transit to get around.”

Firstly this isn't true. Or rather it is in some places because that's all we're building. This quotation comes from Tracy Hadden Loh, Christopher B. Leinberger, and Jordan Chafetz - pretty much champions of dense, high-rise city development. My problem is that it's quoted in a piece about British housing issues. Plus is completely ignores what Americans say when they're asked about the place they want to live and the houses they prefer - and what they actually do when able to choose.

But first let's remember that British suburbs look and feel very different from American suburbs. You'll all be familiar with what American suburbs look like from just about every second thriller or romantic comedy - low rise, often single-storey, family homes built on large plots that feature huge garages, lawns and not much else. Often there's no pavement (as we Brits call it correctly) and the road space is wide.

You'll also know that, while there are some similarities, British suburbia doesn't look much like this. I was brought up in Beckenham which is pretty much an archetypal suburb and while there were some larger houses (and a few very large houses) most of it consists of three-bed semis or, in the older Edwardian parts, solid three-bed terraces.

Even in today's new build suburban housing, the style, size and spacing is completely different from just about anything you'll see built in US suburbia (and not just because we use more brick or stone and less wood). Yet the writings of US anti-suburb urbanists are taken as applicable to this completely different environment.

The development of Britain's suburbs did not sprawl out in an uncontrolled manner, nibbling away willy-nilly at the edge of the countryside. They were, from late Victorian times onwards set out in planned environments - visit the Cator Estates is South London to see how this worked before the first world war and any number of places from Shirley near Croydon to Pudsey in Leeds to see the product of the 1930s housing development boom. These suburban developments were connected to existing communities - helps sustain and expand the services those places provided and allowing for immediate access to public transport networks - and laid out to encompass open space, schools and those rows of local shops we all grew up knowing. The idea that these places weren't 'walkable' is manifest nonsense yet again and again we're peddled this myth that only crowed, dense "mixed-use family housing" can provide for this perfection of urban pedestrianism.

Finally can we just say 'no, not true' to this nonsense:

...because though city-loving hipsters tend to grow up, start families and even buy houses and cars, they’re not going to conform exactly to the lifestyles of their parents and grandparents

Whenever people are surveyed about their preferences, most plump for that familiar family home with a garden - ideally near good schools and not so far from a good link to the city. Perhaps with a good park nearby, a decent pub and some local facilities (post office, chemist, doctors). It remains the case that suburbia - the English sort of suburbia - represent best compromise between urban living and some sort of bucolic countryside idyll.