Liberty isn't the opposite of security, it's the basis for a safe, strong and successful society 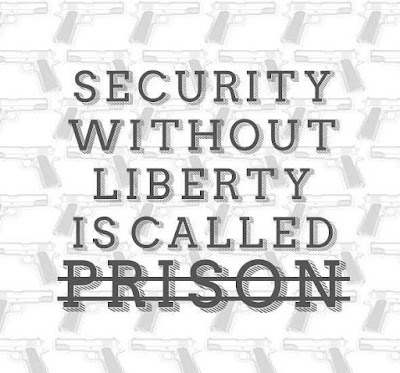 "Those who would give up essential Liberty, to purchase a little temporary Safety, deserve neither Liberty nor Safety."

Although the conext of Benjamin Franklin's remark is somewhat specific (it was about rich people using political power to dodge taxes), the sentiment comes down to us as an essential argument against authoritarian government. It also reminds us, or should do, that liberty is not the opposite of security. Nations with high levels of freedom are, overwhelmingly, safer than places without those liberties. Moreover, people in free countries are less fearful and more optimistic.

So it should concern us that Onward, the supposedly 'conservative' (or at least 'centre-right') think tank run by Theresa May's former policy wonk now frames the future direction of policy - the "Politics of Belonging" is their slightly cutesie term - as a choice between freedom and security:


The poll suggests that policies which increase freedom, autonomy and choice are unlikely to be major vote-winners in the way they were for much of the last fifty years. Instead, policies that restore a sense of belonging, provide security and protect citizens from the modern world are likely to be most effective.

My first thought here is that this is not really a surprise since Onward has given the people it polled a binary choice between "a society that focuses on giving people more security" and one that “focuses on giving people more freedom”. Do you want A or B ask the pollsters without it seems considering that there isn't any real contradition between freedom and security.

There are plenty of competing measures of safety but all of them show that the world's safest countries - least conflict, lower crime, safer streets - are all places we would see as liberal.

The Global Peace Index has a Top 5 of Iceland, New Zealand, Austria, Portugal and Denmark while SafeAround's similar ranking has a Top 5 of Iceland, Denmark, Austria, New Zealand and Singapore. If we look at immediate public concerns about crime for example we have a Top 10 including Sweden, Austria, Norway, Denmark and Japan. And when we look at the extent to which people trust other people (a central factor in the idea of belonging that Onward speak about) we find the same countries - Sweden, Denmark, Norway - crop up near the top again.

Although authoritarian places like Singapore (sadly a favourite of so many on the Tory right, something they share with China's leadership) appear in these lists, the majority of the world's safest places are associated with those individual liberal values Onward place as the opposite to security. They are also places with very free market economies, big welfare states and that invest a great deal in community (much of Denmark's huge welfare state is managed by local not national government, for example).

I like it when conservatives talk about community but this research seems to co-opt the ideas of family and community into a justification for “having experts, not government, make decisions according to what they think is best for the country”. And we see a sort of isolationist, protectionist streak in the claims that that "globalisation, technological change and immigration have harmed ordinary people’s lives, jobs and wages".

What we have here isn't a reflection of what a good, safe, strong society looks like (clue - it looks quite a lot like Denmark) but rather a reflected set of fears about crime, terrorism and economic insecurity. Day after day wise-looking grey heads on the TV tell the public that the economy is weak, that everyone is getting poorer and that austerity is biting. Other 'experts' appear and tell them that every business is trying to rip you off, that all sorts of scams and cons are widespread and the Internet needs controlling because it's fostering all sorts of evils (even though you and I don't see any of them). All this is accompanied by a weird ennui among the great and good; nothing is quite right, there's hate and offence (albeit mostly a sort of lazy on-line hatred and offence) everywhere, and you can't trust anyone any more.

Is it any surprise that, when asked to chose between the freedom that gave us all this bad stuff (hint - it didn't, quite the opposite) and some sort of unspecified 'security' people plump for the latter? And if that just means a few more coppers, a bit more spent on the military and some road safety cameras, then we're all cool with it. But what if it means ending the aspiration for free trade (and what else does “globalisation has not benefited most people” mean) and closing the borders to foreigners - especially brown foreigners? Will that really make us more secure?

If we want a real agenda for conservatives, one embracing freedom and democracy, then we need to start with the idea that the best government is government closest to the people. This means a radical devolution back to communities - not the technocratic and undemocratic nonsense of grand regional mayors given a campaign pulpit and a little bit of central government cash. It means putting communities not technocrats in charge of the police, the hospitals and the schools. It means central government handing over administering welfare and the collection of taxes to those communities.

At the same time we need a return to the presumption that people are mostly decent and honest. And that we should trust them. This means an end to officious demands for ID, the simplification of welfare applications and tax forms, and no longer seeing people as just a reference number on a national database.

We also need to rediscover some old ideas - a chivalry that recognises men are strong but raises them to use that strength for good, a charity that isn't a well-funded industry but rather individual, selfless acts of care for our neighbour, and that the family forms the bedrock of a safe, secure society. What we don't need is more of the security state, more cameras, more restrictions, more controls, bans and limitations - all imposed because it will make us safer, a sort of nanny state on steroids. Most of all we should reject - utterly reject - the seemingly popular idea of “a strong leader who does not have to bother with Parliament”.

The best security doesn't come from any sort of benign authoritarianism, from a sort of cuddly fascism, but from living in a world where we see out neighbour and see someone we can trust, where we know the government because he or she lives round the corner and where the decisions that affect us are mostly made in a place nearby filled with our neighbours not by anonymous authorities in a castle in a city.


Simply wish to say the frankness in your article is surprising.Thanks for sharing.