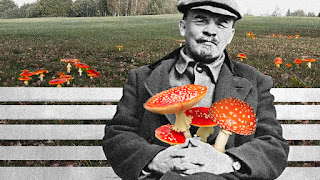 From a late Soviet TV show called The Fifth Wheel:

"I have indisputable evidence," he said, "that the October Revolution was the brainchild of people who'd been taking hallucinating mushrooms for years, and in the long run, mushrooms replaced their personalities, and they turned into mushrooms. So, I just want to say that Lenin was a mushroom. Furthermore, he was not just a mushroom, but also a radio wave."

So said Sergei Kurekhin in conversation with Sergei Sholokhov the show's presenter (it was, I hasten to add a satire not a serious argument). And, in this Reason article by Jesse Walker, we find that they weaved an elaborate conspiracy theory - akin to John Allegro's equally bizarre argument that Jesus was a mushroom - involving Mayan temple frescoes, Carlos Castenada and much else besides.

The article comments on how Kurekhin was involved with the National Bolshevik Party which may - or may not - be an elaborate spoof. The Party did pioneer some of the punkier bits of Russian opposition politics and Kurekhin was an early adopter of fake news as a propaganda (or satire - hard to tell sometimes) tool. As Walker concludes:

Either way, Kurekhin doesn't just have a famous piece of fake news under his belt—he was an early adopter of ironic fascism too. The man may be 23 years dead, but this is his world; the rest of us are just mushrooms growing in it.