Roads, air travel and new technology are where transport investment and subsidy should go - not trains. 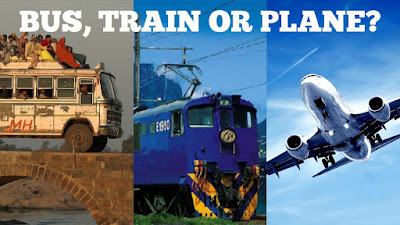 Let's assume, for the sake of argument, that a comprehensive and affordable public transport system is desirable. Also that it is right to use public funds to both develop the system and to subsidise its operations. There are contrary arguments but we can probably agree that such a system would enjoy popular support. The question then becomes what does the system look like given what we know about the history of transport systems, the current arrangements and provision, and the technological direction of travel.

A couple of days ago the Labour Party proposed a massive subsidy for regulated fares (the 40% or so of rail fares where the government controls the price) - a one third cut in fares for loads of train users including many commuters. Plus free rail travel for under 16s. The reaction has been mixed - some have danced with glee (perhaps in anticipation of a cut in their annual season ticket costs) whereas others have responded with the observation that this pretty much represents a subsidy largely benefitting the better off because about half of rail commuters are in the top 20% of earners and, anyway, only about 11% of commuter journeys are on a train.

Some of the defence for this proposal suggests that, by cutting the fares, they will become affordable to commuters who aren't using the train to get to work because of the cost. This may well be true but what we don't know is how many people fit into that category and whether all we achieve is to get people to shift from one form of public transport, the bus, to another, the train. There is a further problem in this expectation since the distribution of employment doesn't allow for fixed line systems to meet the needs of workers other than in very densely populated urban areas with substantial historic investment in those fixed line systems. Even in London, the assumption that travel-to-work happens on a hub-and-spoke basis from the City and Westminster is wrong. Most employment in the city isn't in London's centre but is dispersed across the urban area. This is likely to be even more true for lower paid employment in sectors such as retail, care and hospitality.

To give some further context, the population of the North of England (the regions of North West, North East and Yorkshire) have a population not dissimilar to that of Greater London and the immediate suburban areas at its boundaries. London's population density is 15 times greater than that of the North meaning that employment is even more dispersed than in the capital. A fixed rail system alone simply cannot meet the needs of people travelling to work in the North and it's hard to argue for new fixed rail infrastructure when the same money investment in road-based public transport (and other options such a cycling, e-bikes and the like) would go so much further to meet the needs of "the many" commuters in the region.

So the logic of geography tells us that, outside densely populated urban areas, fixed rail systems are inefficient but at the same time nobody seems to be able to recognise this logic and argue for a different solution to public transport needs. But first let's - setting aside the supposed environmental gains - note that fixed rail isn't even a great solution to long-distance travel: unsubsidised air travel between UK destinations is, in many circumstances, cheaper than travelling by train.

Geography and economics tell us fixed rail is not the best way to meet our objective (a comprehensive and affordable public transport system) because existing networks are insufficient and the cost of new rail infrastructure is prohibitive - one forked high speed line linking London, Birmingham, Leeds and Manchester looks likely to cost at least £75 billion and won't be completed until 2035 at the earliest and probably 2040. And this eye-watering investment won't even scratch the surface of likely transport needs.

The most extensive and comprehensive transport network is our road system. This system connects your front door - as Bilbo Baggins knew - to everywhere in the country, millions of miles of lovingly (well some of the time) maintained roads available for use by pedestrians, cyclists, bikers, horse riders, ox carts, buses, taxis and the private car. The system, compared to rail, is flexible, cheap to run and able to accommodate the needs of travellers. And most of the network isn't congested. Moreover, the strategy of government (although I've a feeling that this is harder than is sounds) is to 'decarbonise' road transport over the same period it will take to build one high speed rail line.

This suggest to me that the right response to our question isn't subsidising rail travel or planning huge investments in relatively limited extensions to that network - this sounds good and probably appeals to a generation brought up on Thomas the Tank Engine while being told how bad cars were for the environment. Short of directing the whole of government infrastructure investment into railways for forty years (and probably not even then) there is no chance of rail meeting future transport needs. Any sustainable, affordable public transport system will include the current fixed rail systems - with maybe some sensible and fundable urban extensions - but most of the focus needs to be on road and air travel systems.

This conclusion seems even more sensible when you consider the technological direction of travel. There is reality of driverless vehicle or the ability for taxi and minibus systems to exploit the mobile phone but there's also the idea of drone delivery, air-taxis and improved short haul travel that could extend the capacity of our existing network by several orders of magnitude. And, while private cars will remain a significant (even dominant) part of the transport environment we will see short-term hire and carsharing become increasingly popular especially in places where off-street parking is at a premium.

Lastly we come to buses and taxis. Driverless vehicles offer (assuming we can make them work) the opportunity to reduce running costs making it more economic to run the services into more remote areas than is the case at present. Places that last saw a bus in 1935 may well see these mystic creatures again. But to make road-based transport systems work, we need both investment and, ahead of driverless, subsidy. And the subsidy should not be on fares but rather on routes, on better buses and on in-bus technology plus work in congested inner-urban areas to give buses and taxis priority. Buses are far more able to meet our objective - an affordable, comprehensive and sustainable public transport system - than are trains. Technology offers the prospect of a bigger economically-sustainable route network but there's a string case for investing ahead of this opportunity through extending the route subsidy that disappeared when Gordon Brown decided subsidising fares was better politics.

Today we see that "better politics" trumping good sense as Labour promise to cut fares for rail commuters by defunding road maintenance while the Conservatives offer a sort of Titfield Thunderbolt world by opening old rail lines closed by that cad Beeching (and both Labour and Conservative governments). Plus a sort of gentle tiptoeing round the gross extravagance of HS2 while making the right sort of environmental mooing sounds about air travel. No party's transport proposals comes close to recognising that we are on the cusp of a transport technology revolution - not just electric and driverless vehicles but the full impact of digital technology on the way people engage with transport options.

The missing bit is that the essential existing networks - road, rail, air traffic - require adequate maintenance. We've spent two decades failing to look after local roads meaning that they are less and less reliable - Bradford, for example, underfunds its highways maintenance by about 30% each year (this is pretty typical of metropolitan authorities). Looking after our systems and, where we can, upgrading them makes more sense than extending the system with new roads and railways especially if this means the maintenance cash gets cut. But I guess saying we'll spend lots on money looking after the networks we've got isn't politically sexy - even if it comes with a promise of investment in super buses, flying taxis and digital technology.

It's not true to say that air-travel is unsubsidised - there is no taxation on aviation fuel, unlike the fuels used for other forms of transport: imposition of similar duties would impact on the economics of air-travel substantially.

The 'impact of digital technology' should not be constrained only to the operation of transport systems, but also to the very need for them. Much of the current commuter traffic is caused by the historic need for people to gather in the same buildings in order to communicate and to share data - now that effective communication and data-sharing can be delivered anywhere, the urge to assemble together in one place is now more about habit than necessity. Imagine if all 'information workers' no longer gathered in large city centre offices - who needs the commuter transport network then? That's the sort of strategic thinking needed, not ridiculous, white-elephant train-sets like HS2.