The library, like the pub, the village hall and the church is a vital community institution - even if you don't use it 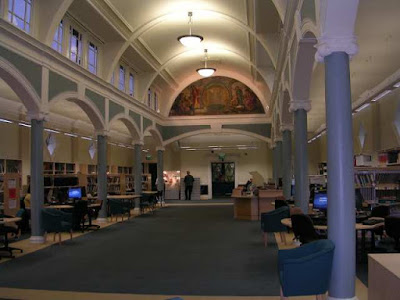 ...the contexts in which civil society operates have become much more hostile. In most parts of the world, communities are increasingly divided. Violence, intolerance and inequality are on the rise. Authoritarians of different stripes have gained a foothold. Restrictions on freedom of speech and association are increasingly common, with just three per cent of the world’s population now living in countries where civic space is defined as “fully open.”And public spheres seem incapable of addressing any of these concerns.

This depressing picture of civic society's polarisation comes from Michael Edwards at Open Democracy as he asks how we escape from the tribalism of modern society - we see more and more groups representing "...a particular position, identity or interest..." and fewer groups "...that attract a diversity of members in terms of class and political affiliation". In part this reflects how politics and political positioning has clustered more and more around these ideas of identity and interest especially on the left. For all the talk of inclusion and equalities, we live in an increasingly fragmented and isolating society.

A while ago I came to the conclusion that the route to community cohesion has to come through the things we share rather than the things where we differ. When I stand with some of my Muslim neighbours watching a firework display, we share the same joy and pleasure at the display - our differences in faith, culture and background are of little consequence. When I go into the local Co-op I share the same mundane experience as all the customers, our identity is not a matter at issue or concern.

We don't have a library in Cullingworth (I don't think we've ever had a library although village old-timers may correct me on this one) but it seems to me that communities taking pleasure in literacy is another of those things that break us away from this polarising emphasis on identity. Yet the way in which we conceive of a library remains caught in the past - perhaps because too few of us make regular use of libraries. My Mum and Dad went to the library once a fortnight and borrowed twelve books and whenever you visited they'd be sat there book to hand. And when you've read six books a week for 70 years, it's fair to say that the breadth of subject for conversation gets pretty broad - literacy is a wonder.

But libraries, created at a time when books were, relative to income, expensive now face a world where books are largely speaking much cheaper. Plus alternatives multiply as the digital world of film, audio, games and words explodes. But these worlds act to reinforce isolation and polarisation too - going to a library is a social act, I'm not so sure scrolling through a Kindle recommends list can be described as one. The problem is that, despite this, fewer of us are using libraries - from 2006 to 2016 users in England declined from over 48% of the population to 33%. That's still a third of the population using libraries but the trend in use is still downwards driven by the digital world and, increasingly, by decisions to close libraries (the matter of local government funding is a whole other subject - you can read some of my thoughts here).

For all the wrong reasons we are pulling funding from libraries, shuffling them into the voluntary sector (and I don't want to belittle community run libraries as they're fantastic places run by super volunteers), and closing them down. And Councils are using the excuse of declining usage and the advancing digital world to justify these decisions even though they all know its really because of the underfunding of social services. To return to where we started, the library like the village hall, the parish church and the pub is a neutral place free from that polarising focus on identity. And libraries do more than just lend you a book.

I asked Twitter whether people still used the library and can confirm that, at least in the unrepresentative world of my Twitter feed, this is the case. But what struck me most was how much, for want of better words, other stuff libraries do. Here are a few:

The problem - and again this might, in part, be a resource issue - is that most people haven't the first idea these things are available. This is from the USA but I'm pretty confident you'd find a similar answer in England:

The latter is an especially glaring example of the dissonance between services provided and knowledge of those services. While 90 percent of libraries offer ebook lending, 22 percent of adults say they don’t know whether their library offers ebooks, and 16 percent say their library does not offer ebooks.

If we want strong communities - and I'm a conservative so I definitely want this - we need to treasure the spaces and places that allow for exchange and interaction beyond the boundaries of our identity and interest groups, outside our tribe. But, like so much that's done by local government, the national debate is characterised by MPs thinking they know better and Whitehall trying to get a pounds worth of sweets for ten shillings. We all know these institutions matter but carry on doing things that put them under threat.

Libraries are more than just places filled with books, they're a community institution that helps bridge divides in society, promotes cohesion and provides a neutral space for that community. Government is failing us if it doesn't see its role as making sure that these sort of institutions are cherished. And funding for such vital places is probably more important than free broadband, bidding for the world cup finals or building superfast trains systems.

If we're being honest, a library is a place for books: what your list portrays is a 'community space - with books', the emphasis being on a multi-purpose community facility which different members can use for different things at different times.

Maybe local authorities should abandon the concept of the traditional library, instead ensuring that each local community has a suitable 'hall' which that community can then use for whatever purposes it chooses, including the provision of books, internet, whatever, if it so decides.

But it must be fully inclusive, with no prejudices preventing its use by all members of the community. So if the local 'swingers club' want to use it one evening a week, they should have no greater or lesser facility than the badminton group or sewing-circle. And if some users want ashtrays to be provided, then so be it, it's their decision - that's what real community is all about, accommodating, not restricting.

Not going to happen, is it?

No, providing ash trays for smokers is not "accommodating." It prevents a significant number of people, asthmatics or those with allergies, for instance, from using the space.

Similarly, I don't want my community gathering space to be a swinger's club. Do you seriously think that people want to gather in a part-time sex club?

As Anonymous 2 so succinctly proves, it ain't going to happen.

Tolerance is not a one-way street, it's what binds a real community and there's no truth in calling it a community of it excludes those with different perspectives on life, just because they don't fit with your prejudices.