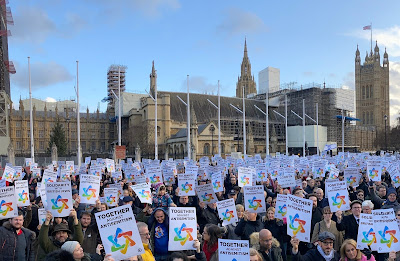 For past elections I've got to this point and posted a careful explanation - the case, as it were - for voting the way I planned to vote. I've been, over the last week or so, thinking through what I might say about the issues in this election.

And then I remembered that my wife's aunt, born in Manchester and living in Leeds, wanted a Magen David - she insisted it had to come from Israel. We have got her one. It came to me that there really is only one issue in the election and that, for the first time, I'll be asking you not to vote for a particular political party - asking you not to vote Labour.

At the weekend a few thousand Jews and supporters gathered in Parliament Square - to do one thing, to say no to antisemitism and to issue a plea for the rest of us non-Jews to listen to them when they talk about the threat to their community. A threat made worse by the fact that the Labour Party, at the highest level, is infected with that antisemitism.

The antisemitism at the heart of Labour means that otherwise good people, folk who see themselves as decent and caring, are considering voting to put a man described by most Jews as an antisemite into the highest political office in the land. Here's how Gideon Falter from the Campaign Against Antisemitism described Corbyn:

Referring to the days of Corbyn as a backbench MP, “when he could speak his mind without fear of scrutiny,” Falter described a man who committed countless blatantly antisemitic acts such as blaming “the hand of Israel” for Islamist terrorist attacks committed in Egypt, honoring a sheikh “banned from the UK for saying that Jews drink non-Jews’ blood,” calling a Hamas terrorist his brother, holding a “repulsive event on Holocaust Memorial Day in which Jews were accused of being the successors to the Nazis,” trying to have the word Holocaust removed from the title of Holocaust Memorial Day, laying a wreath at a memorial for the Black September terrorists responsible for the Munich Massacre, and much more.

Jewish organisations and individuals have gathered together the evidence - you can read many at the Labour Against Antisemitism website - from hundreds and hundreds of Labour activists. Not, as often claimed, people upset about Palestine but the full range of antisemitic nastiness - images of hook-nosed Jews straight out of Nazi propaganda, tropes about Jews controlling the media, the government and international finance, lies about the origins of Ashkenazi Jews, calls for the destruction of Israel - from the river to the sea - with the genocide that entails. And the Labour Party has failed to respond to this infection out of fear that, in doing so, it would get too close to its leader.

The response of many people has been either to deny the antisemitism - "you're confusing anti-Zionism with antisemitism" - or to say a bit of racism is acceptable to get a progressive government. The Guardian, in endorsing Labour summed up this position when it said:

"The pain and hurt within the Jewish community, and the damage to Labour, are undeniable and shaming. Yet Labour remains indispensable to progressive politics.”

A shocking attitude, essentially 'throw the Jews under the bus so you can get all that free stuff from a Labour government".

So I'm not asking you to vote for a particular Party just pleading with you to listen to those worried, frightened Jews. I don't care whether you vote Lib Dem, Conservative, Brexit Party or Monster Raving Looney. I don't care if you scrawl a rude picture on your spoiled ballot paper or stay indoors reading a book rather than voting. Just don't vote Labour. Please.

I agree. The most disturbing election campaign for decades.

I voted. At around 14.30. Middle of the day and the rain is pelting down. Normally I would expect a few cars in the car park. It was virtually full. It's a true blue area so the current MP who is standing will get in of course. But if this holds for the rest of the country and the majority of voters are decent people then the New Communists are going to get a kicking at the polls regardless of the opinion polls. I most certainly hope I am right.